Our latest rankings of the 2020 Democratic candidates 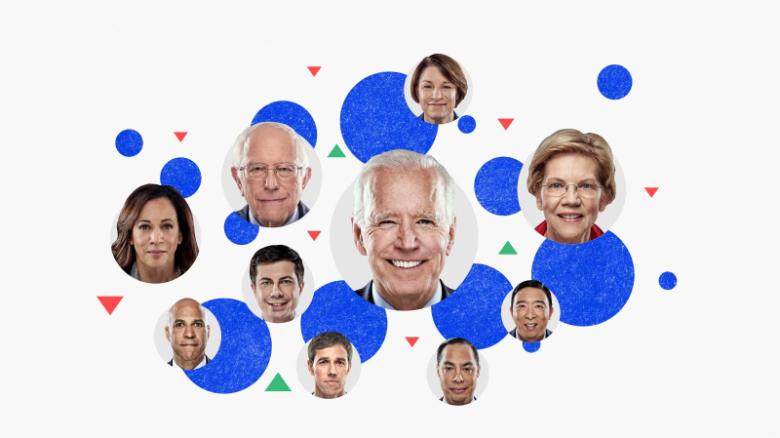 There are (still) 20 candidates running for the Democratic presidential nomination, but only half of that number will appear on the debate stage a week from today in Houston.

Sure, the 10 men and women not on the stage will argue that the Democratic National Committee's rules on how to qualify for the Houston debate (2% in four early state or national polls and 130,000 individual donors) are unfair and favor front-runners. To argue that, of course, you have to say that 2% support is too high a bar, which is a tough case to make -- especially with the primary and caucus season getting closer and closer.

The reality of this primary process is that if you aren't on the stage in Houston next week, you aren't going to be the Democratic nominee. You can keep running for president for as long as you'd like. But that's not the same thing as having a viable shot at being the nominee.

Maybe harsh. But absolutely true. Below, our rankings of the 10 Democrats who have a real chance at being the party's standard-bearer in 2020. 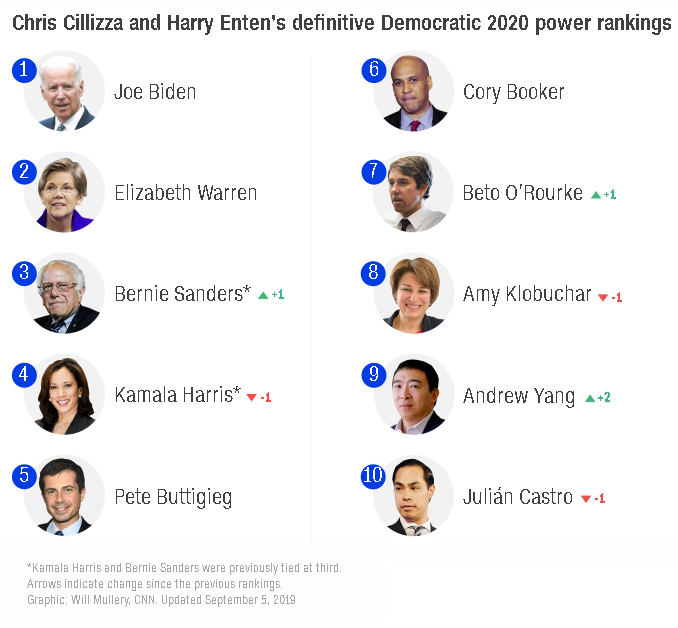 10. Julián Castro: The good news for Castro is that he made the debate stage next week. The bad news is he has the fewest qualifying polls of anyone debating. We've pointed out over and over again that Castro has a unique story to tell (e.g. making immigration revisions a hallmark of his campaign), but he's polling poorly. Even at this point, candidates polling at around 1% nationally and in the early contests rarely go on to win nominations. (Previous ranking: 9)

9. Andrew Yang: We dropped Yang from our last rankings after having him in our top 10 for the past few months. In retrospect, that was a mistake. Yang is currently running sixth nationally, according to the Real Clear Politics polling average, and will be in the next two national debates. The big question for Yang is whether and how he can move beyond his ardent base to actually challenge the first-tier candidates. (Previous ranking: Unranked)

8. Amy Klobuchar: If this election is about electability, Klobuchar has a leg up on the competition. No 2020 presidential candidate has won so frequently in the pivotal Midwest by margins as large as she has. Yet Klobuchar continues to languish in the polls. It's gotten so bad that one Klobuchar-endorser, former Vice President Walter Mondale, has called her bid "a prayer." Klobuchar needs moderate Democrats backing her, but, unless Biden falters, it likely won't happen. (Previous ranking: 7)

7. Beto O'Rourke: The former Texas congressman (still) hasn't found his mojo in the race, but it's hard to make the argument he is any less likely to win the nomination than any of the three candidates ranked below him (or even the candidate ranked directly above hum.) O'Rourke will be in the next two debates and should be able to dine out on his strong early fundraising. He is making a big bet that his anger and frustration over the lack of congressional action on gun legislation will be his ticket to relevance in the race. Maybe. (Previous ranking: 8)

6. Cory Booker: The truth is that candidates six to 10 on our list are all polling well below 5%. What makes Booker stand out is that he has shown an ability to debate well and supposedly has a strong campaign infrastructure in the early states to take advantage of any surge. The problem is that Booker hasn't moved at all in the polls. Maybe with just one debate stage in September, Booker will finally see a bump. (Previous ranking: 6)

5. Pete Buttigieg: After sprinting into the top tier in polling in the spring, the South Bend, Indiana, mayor has spent the summer doing the unexciting work of building organizations in key early states. He's able to do that because of his massive fundraising haul in the second quarter ($24.8 million). The question for Buttigieg is whether, with those organizations now well on the way to being built, he can (re)seize the excitement and energy that got him to this point in the first place. (Previous ranking: 5)

4. Kamala Harris: The deal with Harris is quite simple: She has a ton of potential, and that potential isn't being realized at this point. Twice in this campaign -- her announcement and her first debate moment versus Biden -- Harris has jumped in the polls and then fallen as voters took a closer look. She has more endorsements from major politicians than anyone but Biden. For now, though, we can't ignore the fact that she's polling well behind any of the top three candidates. (Previous ranking: 3, TIE)

3. Bernie Sanders: It still feels to us that the senator from Vermont and his neighbor to the south -- Sen. Elizabeth Warren of Massachusetts -- are on a collision course in this race. They are both competing for the same chunk of most liberal voters in the party, and it's hard to see either one of them winding up as the nominee without knocking down (or off) the other. But so far in the race, Sanders and Warren continue to run nearly equal -- and equally behind former Vice President Joe Biden. (Previous ranking: 3, TIE)

2. Elizabeth Warren: Warren has good crowds, has plenty of dough and has moved securely into a tie for second place with Sanders in the polls. Unlike Sanders, she doesn't have the baggage of running against Hillary Clinton in 2016. Moreover, Warren is going to finally be on the same debate stage as Biden. The big questions are 1) whether she can expand beyond her well-educated, white base and 2) whether she'll be able to handle any added scrutiny that is sure to come with her climb in the polls. (Previous ranking: 2)

1. Joe Biden: The former VP has a theory of the case that is fundamentally different from his main rivals -- he believes that Trump is an anomaly in the country and the Republican Party and, if the President loses the election, things will return to normal. It's not a popular view among the liberal Democratic base, but Biden is banking on the idea that there are a lot more Democratic voters in the party than just the most activist and loudest liberals. And he's betting that they'll vote on the candidate who polling says is best-positioned to beat Trump. Maybe! But it's a bigrisk. (Previous ranking: 1)