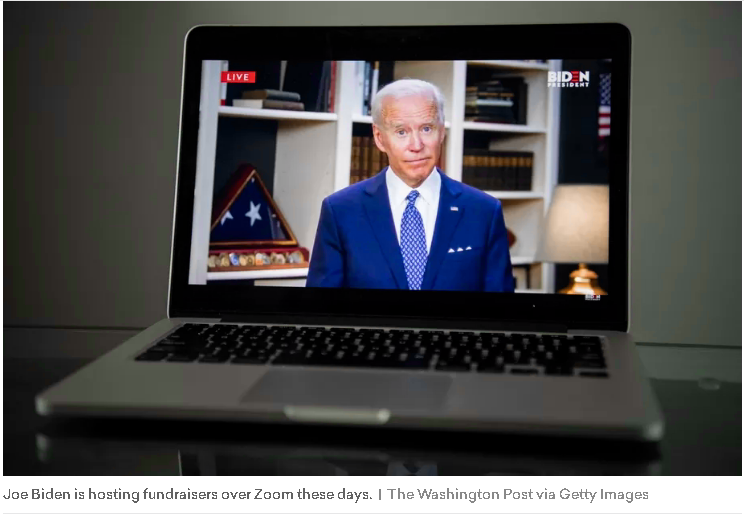 A small group of billionaires and other elite Silicon Valley donors on Thursday threw Joe Biden a fundraiser — over a video conference link with no wining and dining or schmooze time. And it ended up being what is believed to be his biggest fundraiser of the entire campaign.

It was a peculiar event, even for today’s big-money era of presidential politics. Just 25 donors pitched in a total of $4 million for the presumptive Democratic nominee and the Democratic Party as a whole. Simple math shows that an average of $160,000 per person was handed over in return for just about 20 minutes with Biden over Zoom. There were also two questions from the audience as well as a “virtual photo op” with those who paid top dollar.

That haul was undeniably possible because of the lead donors’ bank accounts. The principal host was Tom Steyer, the San Francisco billionaire who ran for president himself before returning to his typical role in Democratic politics as one of his party’s very biggest contributors. Other hosts included climate activist Nicole Systrom, the wife of Instagram founder Kevin Systrom; and Silicon Valley power couple Swati Mylavarapu, the former finance chair for Pete Buttigieg’s campaign, and her husband Matt Rogers, the co-founder of Nest.

Perhaps more than any other fundraiser during the entire campaign, the event epitomized just how much Biden has embraced big-dollar fundraising, even as his party grows suspicious of the billionaire class. (Now ahead of the general election, even Democrats like Elizabeth Warren, who campaigned against big-money politics, are headlining fundraisers for him.) While the virtual event was centered around climate policy, not tech issues, it also reflected Biden’s comfort with Silicon Valley, another group that some progressive activists now regard with doubt.

The event carried a minimum ticket price of $100,000, according to an invitation. And as a sign of how exclusive it was, some Biden bundlers in the Bay Area said they didn’t even know it was happening. It was organized by Steyer through a group called Climate Leaders for Biden, which is largely made up of donors in the Bay Area, and it is planning a second event for June 18 that is expected to bring in at least another $3.2 million, according to a Steyer spokesperson.

The event is also a sign of Biden gaining traction in tech. During the early days of the primary, Biden had an unusually weak relationship with Silicon Valley’s contributors, particularly the younger set of entrepreneurs who came into wealth over the last decade or so. Over the last few weeks, the Biden campaign has significantly ramped up its outreach to these people, hosting a number of fundraising events tailored for the tech community and making campaign digital aides available, even on platforms like the Silicon Valley app Clubhouse, so that tech titans can offer their advice.

Meanwhile, some of these Silicon Valley billionaires are taking matters into their own hands, pushing their own digital and media solutions to boost Biden through outside groups. We wrote about those efforts last week.