By NATASHA KORECK I www.politico.com 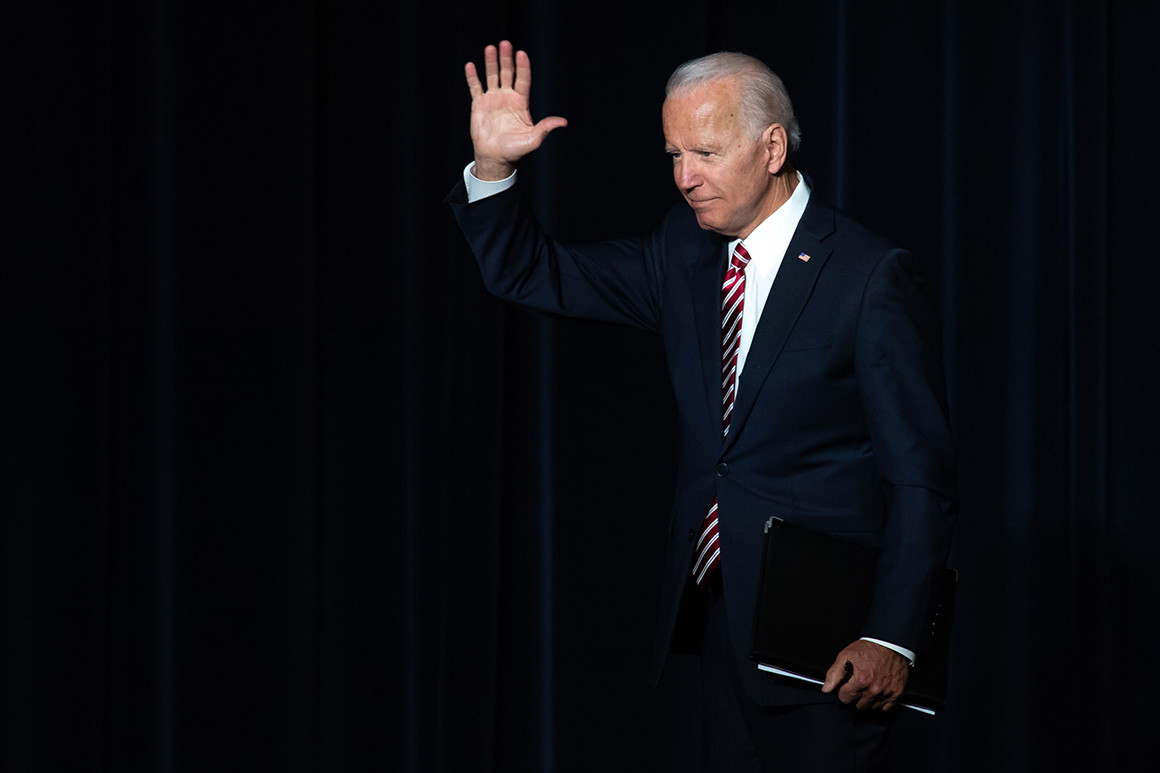 Joe Biden plans to allow media access to all of his fundraising events, a show of transparency designed to address the Democratic base’s increasing discomfort with the role of big-money donors in politics.

Unlike his 2020 rivals who have built out robust small-donor online fundraising operations, Biden is more reliant on the kinds of big donors and high dollar events that Democratic primary voters frown on. On the day he launched his presidential bid last week, opponents including Bernie Sanders — an online fundraising powerhouse — seized on Biden’s first fundraiser in Philadelphia as an opportunity to criticize the former vice president for being too cozy with corporate donors while at the same time positioning himself as the working-class candidate.

But Biden’s prepared remarks and his answers in any question and answer session with those donors will be made public in the pool reports. And the access will at least provide some level of visibility into what’s happening in the room and who’s attending the fundraisers.

The Biden campaign’s approach goes beyond the access that others in the field permit. Campaigns of Pete Buttigieg, Cory Booker and Kamala Harris, for example, do not allow uniform access to private fundraisers.

The move comes as the 76-year-old faces a historically diverse field of candidates who are responding to voters’ concerns by rejecting traditional fundraising practices. Sen. Elizabeth Warren took the most comprehensive position by declaring she will no longer even meet privately with big-dollar donors, much less hold closed-door events available only to an elite group.

Candidate have instead shifted their focus to raising money online and touting grassroots outreach, measuring their own strength not just by total dollar amounts but by the number of individual donors and how small the average donation turns out to be.

Biden’s campaign announced last week that he raised $6.3 million on his first day as an announced candidate, ranking him first in the crowded Democratic primary in terms of first-day fundraising totals and erasing doubts that he might not be able to compete in the new era of small-dollar-donor-fueled campaigns.

At least some of the calculation behind Biden’s approach, according to a donor close to the campaign, is putting the gaffe-prone former vice president on notice that his remarks will be public.

“He wants to make sure that everybody understands what he says in public isn’t any different than what he says in private,” said the donor, who was briefed on the policy but not authorized to talk about it publicly. “He understands: too many phones, too many recordings,” are available to make their way to social media.

Technology has made it so anyone — from a high-level donor to a caterer working an event — can capture video or audio in a closed setting. And it’s been in those unguarded moments where candidates often slip up and create major headaches for their campaigns.

In 2008, Barack Obama set off controversy after his remarks at a private fundraising event in San Francisco leaked out — he had infamously referred to frustrated voters in a small Pennsylvania town as people who “cling to guns or religion or antipathy to people who aren’t like them.” And Hillary Clinton’s remarks at a New York fundraiser in 2016 that supporters of Donald Trump belonged in “a basket of deplorables,” haunted her in the final months of the campaign.

“Whether it was ‘47 percent’ quote, ‘clinging to guns and religion,’ or ‘basket of deplorables’ – all of which were statements used by presidential candidates in fundraisers that caused a degree of controversy — I think there’s a concern that candidates say things behind closed doors to financial supporters that they wouldn’t say on the stump,” said Rufus Gifford, former national finance director to Barack Obama. “That’s why having media in the room is a good thing.”

The practice with Obama was that events were covered by pool report, where print reporters were allowed some, but not unfettered, access to the room, said Ami Copeland, Obama’s one-time deputy national finance director.

“That’s how he did it. There’s some access but not complete access — media can’t mix and mingle through the room,” Copeland said. “It seems like a nice nod to transparency while protecting the aura of intimacy.”

On Saturday, state Sen. Dick Harpootlian, an attorney and former South Carolina Democratic Party chairman, will host a Biden fundraiser at his home, where tickets range from $1,000 and $2,800, he said. Harpootlian said 60 to 100 people are expected to attend and, while he acknowledged having media attend means guests forgo some sense of privacy, he said it ultimately comes with the territory.

“Anybody is concerned about having public access to your home, but we’re having a fundraiser for the [former] vice president of the United States who wants to be president of the United States and if his campaign wants to make it a transparent process, we’ll have sacrifices made, but it’s something we will do,” Harpootlian said. “It’s Joe Biden’s position that there is transparency in his campaign, I don’t know anybody who’s attending who will have a problem with that.”

Several veteran fundraisers who have worked on national presidential campaigns called Biden’s move unusual, given that the rule of thumb in fundraising, especially in private homes, is to respect the privacy of the homeowner. Another fundraiser, who is acting as a bundler to a competing candidate in the field, dismissed the move as little more than smoke.

“At the end of the day, the transparency is disclosed on everybody. They’re required to disclose who the people are in [Federal Election Commission] reports,” the fundraiser said. “To me, it’s more optics than anything else.”

Either way, the Biden campaign’s move is unlikely to be welcomed by the donor class.

“When you organize people will ask: ‘There’s not going to be press there, right?’” one veteran national fundraiser said. “A lot of these things are people in their own circles. I don’t think donors want everyone to know who they’re schmoozing with reported.”