"I will not sit quietly on the sidelines any longer while our President praises despotic leaders, insults democratic allies, unravels arms control agreements and rails against the rule of law." Weld in the news

William Weld served as the Republican governor of Massachusetts from 1991 to 1997. Weld announced that he was running for president of the United States on April 15, 2019.

He announced that he had formed a presidential exploratory committee on February 15, 2019. Weld focused the lead-up to his run on criticisms of President Donald Trump's personality and economic policies, saying the president was paying more attention to dividing people than addressing the problem of overspending or preparing to replace jobs that will be lost to automation in the near future.

Weld was a Libertarian candidate for vice president of the United States in 2016.

Weld clerked for a year at the Massachusetts Supreme Judicial Court before entering private practice at the law firm Hill & Barlow in Boston. In 1981, he was appointed U.S. attorney for Massachusetts under Republican President Ronald Reagan. He served until 1986, when he assumed the position of assistant U.S. attorney general at the Department of Justice's criminal division. He left the Department of Justice in 1987.

Weld was elected governor of Massachusetts in 1990, becoming the first Republican to win a gubernatorial election in the state in 20 years. Weld beat Democratic candidate John Silber by 4 points. In 1994, he was re-elected with 71 percent of the vote.

Weld ran unsuccessfully for the U.S. Senate in 1996. He resigned as governor in 1997 to pursue a nomination by President Bill Clinton (D) as the U.S. ambassador to Mexico, a position to which he was not confirmed. He then re-entered private practice in New York. Weld ran unsuccessfully for governor of New York in 2006. He withdrew from the Republican primary after the party endorsed John Faso (R) and ran instead as a Libertarian, receiving 2 percent of the vote in the general election.

Weld ran for vice president of the United States in 2016 on the Libertarian ticket with Gary Johnson as the presidential candidate.

An election for president of the United States will be held on November 3, 2020. Weld announced that he was running for president on February 15, 2019.

Note: Trump and Clinton were projected to receive 306 and 232 electoral votes, respectively. Seven electors, however, cast votes for other candidates. Read about what happened here. The results listed above are based on reports from state secretary of state offices and election boards.

Weld entered the race for governor of New York in 2006 as a Republican candidate. He lost the nomination to his competitor John Faso, with analysts stating that he was too moderate to appeal to New York's conservative right. In April 2006, Weld announced he would seek the Libertarian nomination for the gubernatorial race, winning the nomination that same month. Weld lost to Democrat Eliot Spitzer, who secured 70 percent of the vote over Faso's 28 percent; Weld received less than 2 percent.

In 1996, Weld ran as a Republican for a seat representing Massachusetts in the U.S. Senate. He was defeated by incumbent Senator John Kerry (D) in the general election by a 7 percentage point margin of victory.

Weld won re-election to a second term as governor of Massachusetts in 1994 by the largest margin in Massachusetts history, garnering 71 percent of the vote. He ran against challenger Mark Roosevelt (D), great grandson of Theodore Roosevelt.

Weld successfully ran for governor of Massachusetts in 1990, defeating Democratic challenger John R. Silber by a 4 percentage point margin of victory. The Massachusetts secretary of state declared the turnout for the election, which was 70 percent, the highest since 1962. Weld's victory was considered significant in a largely liberal state that hadn't elected a Republican governor in 20 years.

What Past Also-Rans Can Teach GOP Challengers to Trump 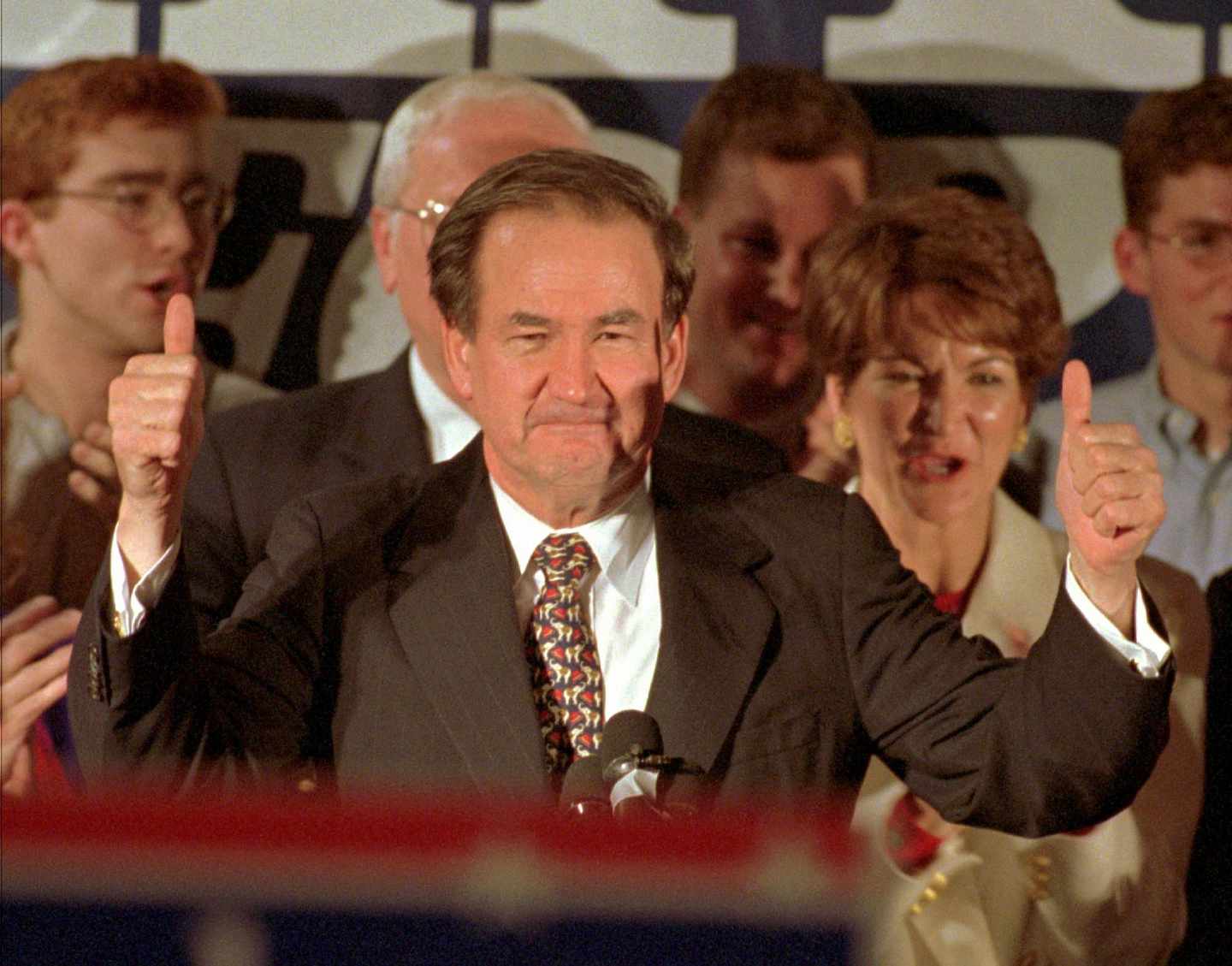 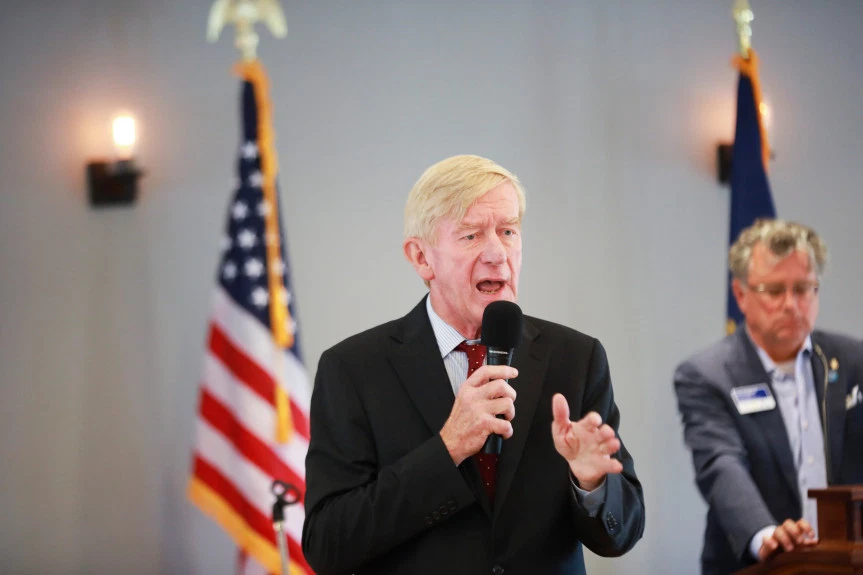 PORTSMOUTH, NH- July 18, 2019: Former Massachusetts Governor and Presidential hopeful Bill Weld speaks before the Portsmouth Rotary Club at the Portsmouth Country Club in Portsmouth, New Hampshire. (Staff photo By Nicolaus Czarnecki/MediaNews Group/Boston Herald) By LISA KASHINSKY | Boston Herald PORTSMOUTH, N.H. — Want a Republican alternative to Donald Trump? Bill Weld is making his pitch. The former two-term governor of Massachusetts is decrying the state of affairs in Washington as he mounts a primary challenge against the president. Campaigning Thursday in the Granite State, Weld said Trump “thinks American citizens are his natural enemies.” “People try to claim he’s a really good counter-puncher in politics. He’s not a counter-puncher. He’s just vindictive by nature, and mostly against little people. He’s like bullies everywhere,” Weld said. “If nobody stands up to him, which is what we see with the Republican Party in Washington, D.C., he’s going to keep being a bully. “I would treat everybody with respect,” Weld added. “That doesn’t cost anything.” Weld spoke to about three dozen people at a Greater Derry Londonderry Chamber of Commerce event Thursday morning and a group double in size at a Portsmouth Rotary Club event that afternoon. While some voters said they found his message “refreshing,” they weren’t entirely sold on his ability to successfully challenge Trump. “He had some good things to say,” said Bill Simpson, an independent from Greenland, N.H. “I don’t think he has a chance in hell at the nomination.” Weld also lacks money, with just under $700,000 in total contributions. Trump and the Republican National Committee raised $105 million in the second quarter. GOP strategist Ryan Williams said, “Bill Weld has no shot at winning.” “He obviously feels very strongly about President Trump and the direction he’s taking the party, and it’s a direction that’s at odds with Bill Weld’s idea of the party,” Williams said. “But winning or even making a dent in President Trump’s support — his campaign is completely insignificant in that regard.” Weld knocked the president’s attack on “the squad” of minority freshman congresswomen and chants of “Send her back” during Trump’s North Carolina campaign rally Wednesday night. “Last time it was, ‘Lock her up.’ Now it’s, ‘Send her back,’” Weld said. “It’s not worthy of the White House, really.” As Weld — the vice presidential nominee from the Libertarian Party in 2016 — looks to win New Hampshire’s Republican primary, he has a message for Democrats, too. “If you want to vote against Mr. Trump twice, come vote in the Republican primary for me, because that’s directly against Mr. Trump,” Weld said. “Then take a long hot shower with soap and go back to being a Democrat.” Portsmouth Democrat Susan Gold liked Weld’s idea for pulling a Republican primary ballot — but didn’t think she’d do it. Still, she enjoyed Weld’s “encouraging” message, saying “it sounds like a completely different party.” 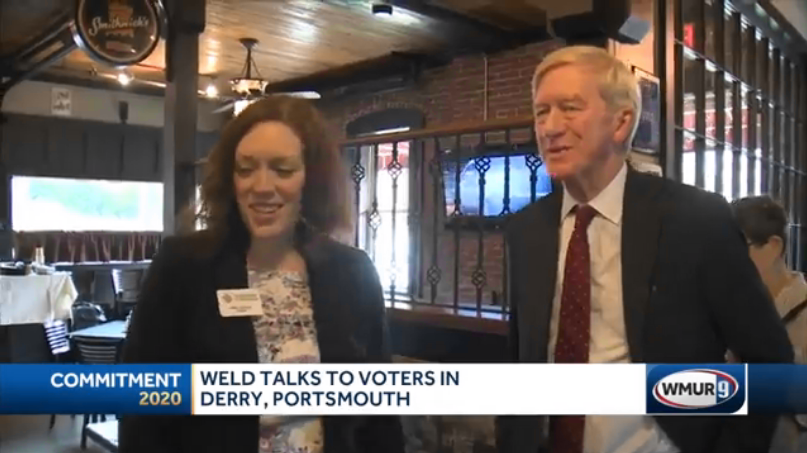 DERRY, N.H. — Former Massachusetts governor and Republican presidential candidate Bill Weld made stops in New Hampshire on Thursday. Weld spoke to a crowd in Derry about health care, the economy and climate change. The only Republican challenger to President Donald Trump so far, Weld said he shares the same concerns as voters. “I think the voters in Derry showed they are very serious about the problems of climate change, the deficit, all the things I'm worried about, work education and getting the job done in Washington,” he said. “I was impressed with the crowd here.” Weld also visited Portsmouth on Thursday.