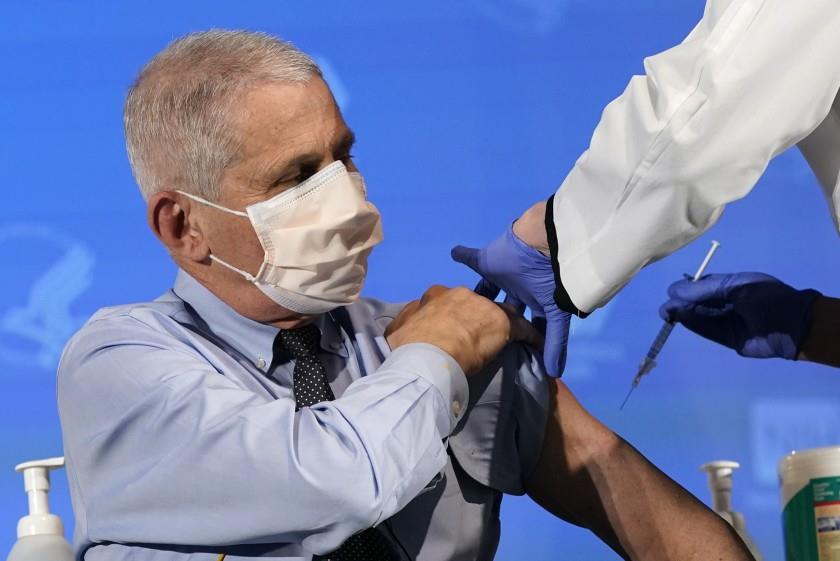 “The deaths are real deaths,” Dr. Anthony Fauci said in an ABC interview. “That’s not fake.”

“We have not been delivered what was promised at the national level,” Garcetti said on CBS’ “Face the Nation.” The federal government, he added, “can’t tell the local governments and state governments to do something and not give us aid.”

As a dreaded surge of post-holiday infections began to materialize in California and in other U.S. hotspots, public health experts warned that the first month of 2021 could be even worse than December, which was the pandemic’s deadliest month to date.

“There’s no running away from the numbers,” Fauci said on ABC’s “This Week.”

Separately, on NBC’s “Meet the Press, Fauci said: “It could and likely will get worse in the next couple of weeks, or at least maintain this very terribly high level of infections that we’re seeing.”

“We’re going to see the epidemic probably peak at some point this month,” concurred Scott Gottlieb, a former Food and Drug Administration commissioner under Trump who was interviewed on “Face the Nation.”

The United States has by far the world’s highest number of confirmed infections, more than 20 million, along with the highest number of reported deaths, which exceeded the bleak threshold of 350,000 early Sunday, according to the Johns Hopkins University tracker.

California accounts for more than 2 million infections and 26,500 deaths, with Southern California as an epicenter.

“We’re seeing a person every six seconds contract COVID-19 here in Los Angeles County,” Garcetti said. The mayor attributed the surge to population density and spread within households. He warned that people with underlying conditions accounted for a still-high but falling share of fatalities, suggesting that the risk to the general population was growing.

“My message to everybody,” Garcetti said, “is that this is not only going to come for somebody that you love — this is going to possibly come for you.”

The virus’ unrelenting spread coincides with unprecedented political turmoil surrounding Trump’s refusal to accept his loss in the November election. The 117th Congress convened Sunday, but two incoming Republican members, including Rep. David Valadao of Hanford, had to stay away after testing positive for the coronavirus.

Another GOP congressman-elect, Luke Letlow of Louisiana, died at age 41 last week after falling ill with COVID-19. His seat will be filled in a special election.

The convening of Congress came three days before lawmakers were set to tally electoral college votes, usually a perfunctory task. Trump, who made an early return last week to the White House from his Mar-a-Lago resort, voiced fresh encouragement Sunday for congressional allies seeking to obstruct the proceedings in a bid to overturn the election result — an effort that has almost no chance of preventing President-elect Joe Biden’s inauguration Jan. 20.

The president also retweeted posts calling on his supporters to stage demonstrations in the capital as the congressional count was taking place. Last month, pro-Trump protests by far-right groups triggered scattered violence.

“I will be there,” Trump tweeted. “Historic day!”

In the weeks since the election, Trump has rarely mentioned the coronavirus, except in the context of his grievances about how the public health crisis is depicted in official reports and news stories. On Sunday, the president again complained on Twitter about his government’s “ridiculous method of determination” for counting fatalities.

Trump’s surgeon general, Dr. Jerome Adams, however, told CNN’s “State of the Union” that “from a health perspective, I have no reason to doubt those numbers.”

Adams, who had projected 20 million U.S. vaccinations by the end of last month, acknowledged that the vaccine rollout had not gone as quickly as hoped, with only about 4 million taking place. But he expressed optimism that the pace would soon quicken.

“The good news is that we are seeing it quickly ramp up,” he said, “thanks to our state partners.”

Fauci, who will be serving in the Biden administration, agreed that “we’re not where we want to be” in the speed on vaccinations but said on NBC that that could be turned around this month.