The Republican Jewish Coalition outlined the plans at its spring meeting at one of Sheldon Adelson's casinos.
By ALEX ISENSTADT 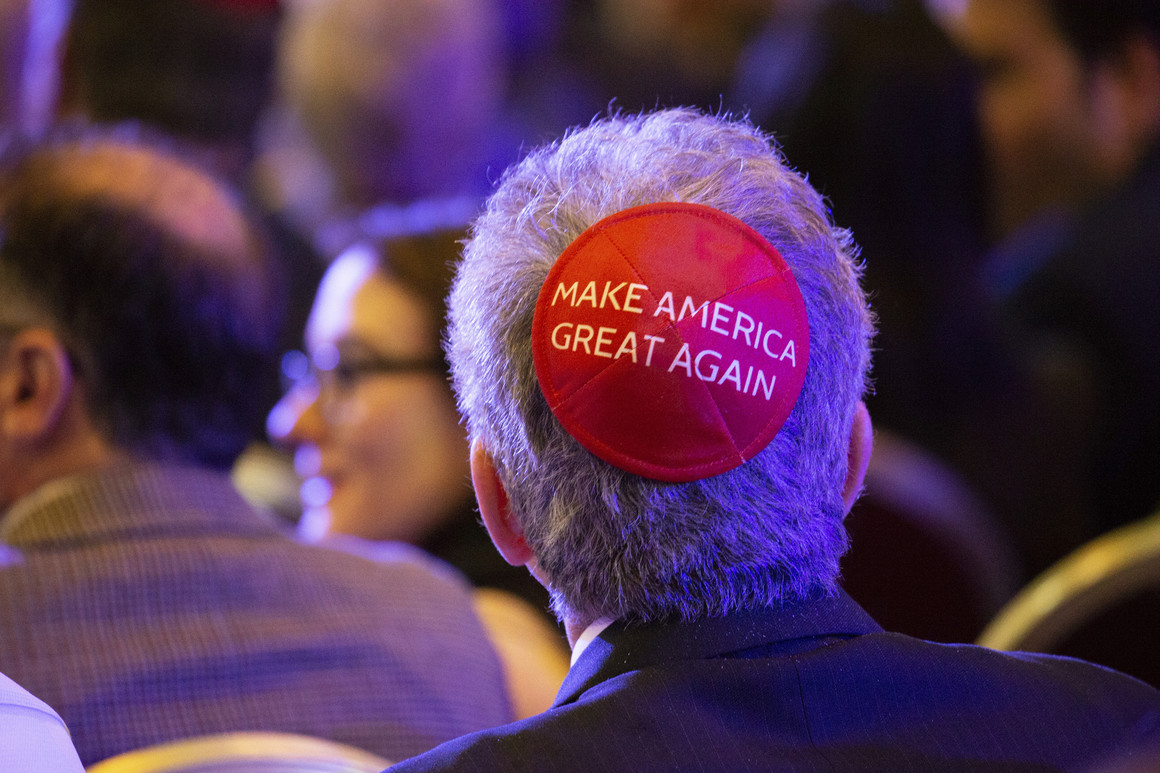 LAS VEGAS — Republicans are planning a multimillion-dollar offensive aimed at fracturing the Democratic Party’s decadeslong stranglehold on the Jewish vote.

Spearheading the push is the Republican Jewish Coalition, which receives substantial funding from casino mogul and GOP megadonor Sheldon Adelson. On Friday morning, the group’s board members — many of them prominent Republican Party donors — gathered in a conference room at Adelson’s Venetian resort, where they were briefed on plans for a $10 million-plus blitz geared toward attracting Jewish support for President Donald Trump. The investment, people familiar with the early discussions said, will far surpass what the group spent in past presidential elections.

With Democrats embroiled in a wrenching internal debate over anti-Semitism and support for Israel, Republicans are moving to capitalize with an aggressive campaign painting Trump — who has himself faced accusations of stoking anti-Semitism— as a fierce and unapologetic defender of the Jewish state.

“We’re at the intersection of a very unique moment in time where we have the most pro-Israel president ever in history in Donald Trump, and we also at the same time have the Democratic Party — because of the pressure of the progressive left— moving away from the traditional support for Israel that has existed going back to 1948,” said Matt Brooks, who has served as RJC executive director for nearly three decades.

“This strain within the Democratic Party is making those centrist and center-left Jews who care about these issues feel more and more uncomfortable, and with the strength of Donald Trump and the Republican Party on these issues, we believe that we’ll be able to bring those folks over to the Republican side,” Brooks added.

At a time when Trump’s approval rating remains mired in the low- to mid-40s, the offensive shows how Republicans are taking steps to contest any votes they can. Jews only account for about 2 percent of the U.S. population and have overwhelmingly supported Democrats in past elections. But GOP officials believe that siphoning off even a small portion the Jewish vote in a few battleground states could be critical in 2020.

“The Jewish vote will remain and largely loyal Democratic vote because of domestic issues largely, but if there was ever a cycle where Republicans could make inroads, it is this cycle,” said Ari Fleischer, a former George W. Bush White House press secretary who now serves as an RJC board member. “If you accept that there are sizable Jewish populations in Florida, Ohio, Pennsylvania [and] Michigan, the Jewish vote — if we can make additional inroads — can be very helpful in putting you over the top. The White House knows that.”

The administration is all-in on the strategy. On Saturday, Trump, Vice President Mike Pence and three White House officials — Jared Kushner, Jason Greenblatt, and Avi Berkowitz — all made pilgrimages to the Venetian, where RJC members were gathered for the third day of their annual spring conference. Before a sea of supporters waving “We are Jews for Trump” signs, the president accusedDemocrats of opposing Israel and “advancing by far the most extreme, anti-Semitic agenda in history.”

Before taking the stage, Trump met privately with Adelson and his wife, Miriam, who together gave more than $120 million to Republican causes during the 2018 midterms. The 85-year-old Adelson, who’s been undergoing cancer treatment, hadn’t been expected to be in attendance. But those close to the billionaire said he was intent on making the Trump rally, and when he entered the auditorium on a motorized scooter and wearing a red “Make America Great Again” hat, he was greeted with a standing ovation.

Democrats are deeply skeptical that the GOP will succeed in making inroads with Jews. Since 1992, according to exit polling data, the Jewish vote has remained remarkably stable, with Democrats winning between 69 percent and 79 percent in each presidential election.

Halie Soifer, the executive director of the Jewish Democratic Council of America, said that recent polling her group had conducted showed that Jews remained confident in the Democratic Party’s posture on Israel and that they overwhelmingly disagreed with Trump on an array of domestic issues. And, she pointed out, Republicans had long vowed to make gains with Jewish voters only to fall short.

“This is not new. We’ve seen different iterations of this in previous elections either in midterm or presidential elections, and each time it’s kind of repackaged with a different narrative in an attempt by Republicans to chip away at the Jewish vote — and every time it fails,” Soifer said. “And while the repackaging might make it look like there are different reasons behind it — and certainly we are in a slightly different political context today than we have been in the past — the result is the same.”

But the Las Vegas foray was the latest in an ongoing White House effort to reach out to the Jewish community. In some instances, the administration has even made overtures to those who have long aligned themselves with the Democratic Party.

Kushner, the administration’s point person on the Middle East, has been in touch with Haim Saban, a pro-Israel megadonor who in 2016 gave more than $6 million to a super PAC backing Hillary Clinton for president.

In an interview, Saban said that Kushner had never pressed him who he planned to support in 2020 and that their conversations largely surrounded Israel. While the billionaire media executive said he remained a Democrat, he offered a note of caution at a time when some high-profile figures in his party are questioning the long-standing policy of unflinching support for the Jewish state.

“I sincerely hope the [presidential] nominee continues the traditional Democratic Party [policy] as it relates to the U.S.-Israel alliance,” Saban said.

To some Republicans, highlighting issues surrounding Israel and anti-Semitism goes beyond simply appealing to the Jewish vote. Among those making the rounds at the Venetian this week was Dan Conston, who, as the president of American Action Network and Congressional Leadership Fund, the main pro-House GOP outside groups, has been arguing to major donors that portraying Democrats as unwilling to confront anti-Semitic forces in their party will boost Republicans with the suburban voters who abandoned them in 2018.

Ahead of this week’s conference, the group released digital advertisements tying swing-district House Democrats to Rep. Ilhan Omar (D-Minn.), who has come under fire for using tropes widely viewed as anti-Semitic. While some senior Democrats have rebuked Omar, she has retained her seat on the House Foreign Affairs Committee.

“It's appalling that Democrats have stood by and tolerated openly anti-Semitic commentary from their own members,” Conston said. “If Democrats continue to stand by and do nothing, we think suburban voters across America will find it similarly appalling next election.”

That Jewish Republicans have emerged as outspoken champions of Trump’s reelection bid represents something of a turnabout. The RJC was torn over the president during the tumultuous opening days of his tenure and broke with Trump over his handling of the violence in Charlottesville, Va., when he equated white supremacists with counter-protesters.

Yet many key Jewish Republicans are now firmly in the president’s corner. That includes Fred Zeidman, a longtime GOP giver who chairs a New York City-based investment banking firm. Zeidman, who backed Jeb Bush in the 2016 GOP primary, initially harbored concerns about Trump’s position on Israel and was rankled by the White House’s failure to mention Jews in its January 2017 statement on Holocaust Remembrance Day.

But Zeidman, who met with Trump early in his White House tenure to discuss Israel, said he no longer had any doubts about Trump. The president, he said, has been “incomparable” in terms of “how good he’s been to Israel.”

Zeidman, who helped oversee Jewish outreach on the George W. Bush, John McCain and Mitt Romney presidential campaigns, recalled a recent conversation with Houston oilman Harold Hamm. During the Bush years, Zeidman told Hamm, he had a T-shirt quoting the late Israeli leader Shimon Peres as saying that “George W. Bush is the greatest president Israel has ever had.”

“I had,” Zeidman told the billionaire oilman, “to tear up my T-shirt.”