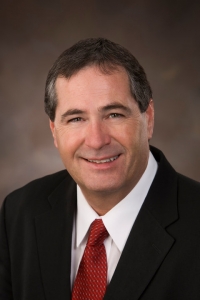 Doug Goehring (Republican) is the North Dakota Commissioner of Agriculture. Goehring was appointed on April 1, 2009.

Goehring is a third-generation farmer. He and his son, Dustin, operate a 2,000-acre, no-till farm near Menoken in south-central North Dakota. On their farm, the pair raise corn, soybeans, spring wheat, winter wheat, sunflowers and canola. Before assuming office, Goehring was president and chairman of the board of Nodak Mutual Insurance Company and a director of American Agricultural Insurance Company. He has served as vice president of the North Dakota Farm Bureau and is a member of several statewide and national farm associations. He is also the former director of both the United Soybean Board and the North Dakota Soybean Council, former secretary/treasurer of the North Dakota Grain Growers Association and a member of the USDA's Area 4 Research Farm Steering Committee. Goehring also served previously as president of the Menoken School Board and chairman of the Bismarck Mandan Chamber Agriculture Committee.

Jim Dotzenrod advanced from the Democratic primary for North Dakota Commissioner of Agriculture on June 12, 2018.

Incumbent Doug Goehring advanced from the Republican primary for North Dakota Commissioner of Agriculture on June 12, 2018.

Goehring ran for re-election to the office of North Dakota Commissioner of Agriculture. Goehring won the Republican nomination in the unopposed primary on June 10. The general election took place on November 4, 2014.

The North Dakota Commissioner of Agriculture also serves as a member on the state's three-member Industrial Commission. This commission, among many duties, regulates North Dakota's oil and gas industry. The race for agriculture commissioner took on a heightened profile due to candidate disagreements over how to deal with the rush to extract oil and gas from the Bakken shale.

The incumbent, Republican Doug Goehring, expressed support for an accelerated rate of oil extraction, opposing legislation that might slow down the growth of drilling. In a speech at the state Republican convention, he implied support for a balanced approach, saying that "the ties between agriculture and energy have never been more important that they are today," but the North Dakota Farm Bureau endorsed his primary challenger, Judy Estenson. Estenson, who was running to reform the office following allegations of mismanagement and harassment, lost the state GOP endorsement and dropped out of the race.

The Democratic challenger, Ryan Taylor, expressed concern about the consequences of the oil rush. He said, "You can’t unleash all that oil and then wonder why the train tracks are full of oil tankers and you can’t get grain on from the elevators in North Dakota and get that product to market." Taylor advocated for greater weight on agricultural considerations; he was described as "the man who’s going to bring balance to the Industrial Commission." 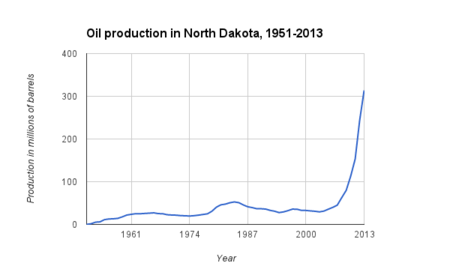 Since oil was first struck in 1951 in North Dakota, over 13,000 wells have been drilled. The graph to the right shows how oil production has soared in the state, growing from 45.14 million barrels of oil in 2007, to 313.8 million barrels in 2013. This growth has brought both opportunities and challenges for the state. A study for the American Petroleum Institute estimated that 12 percent of state employment, and 13.1 percent of labor income in 2011, was due to the oil and gas industry.

The growth of the industry has also brought challenges, however, as large numbers of people have moved to the area seeking employment. This migration has increased the demand for housing, as well as police, fire and other government services. Additionally, concerns have been raised over the potential environmental impacts of such a large-scale boom. While fracking has been used for decades in the United States, there are concerns over the ability of regulators to enforce environmental protections consistently.

On November 7, 2006, Roger Johnson won re-election to the office of North Dakota Commissioner of Agriculture. He defeated Doug Goehring (R) in the general election.

On November 2, 2004, Roger Johnson won re-election to the office of North Dakota Commissioner of Agriculture. He defeated Doug Goehring (R) in the general election.