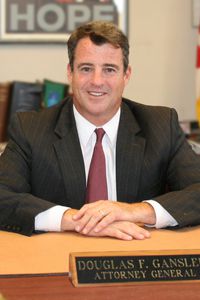 Douglas F. Gansler (Democratic Party) is running for election for Governor of Maryland. He declared candidacy for the Democratic primary scheduled on June 28, 2022.

Gansler (Democratic Party) was the Attorney General of Maryland. He assumed office in 2007. He left office in 2015.

Douglas F. "Doug" Gansler (b. October 30, 1962) is the former Democratic Attorney General of Maryland. Gansler won the Democratic nomination in the primary election on September 12, 2006, and beat Republican Scott Rolle in the general election on November 7, 2006, with 61 percent of the vote. Gansler was re-elected on November 2, 2010. Gansler was the only statewide candidate in the country to run completely uncontested in the 2010 elections. He took 98.18 percent of the vote.

Rather than run for a third term as attorney general in 2014, Gansler made a bid for the governor's office. Gansler lost in the primary on June 24, 2014. He was succeeded by Democrat Brian Frosh in January 2015.

Prior to becoming Maryland's chief prosecutor and law enforcement official, Gansler served eight years as state attorney for Montgomery County. Containing roughly one million residents, Montgomery County is the largest jurisdiction in the state of Maryland. In this position, Gansler handled several high-profile cases. Notably, his prosecution of John Muhammad and Lee Boyd Malvo, known as the Beltway Snipers, helped Gansler establish a name for himself in the state justice system. He was also an assistant United States attorney. Although Gansler's legal background centered mainly on criminal prosecution, he has also worked as a civil litigator and associate for the law firms of Coburn & Schertler and Howrey & Simon, respectively.

During his tenure as attorney general, Gansler focused on issues such as consumer protection and cracking down on pollution in the Chesapeake Bay. In addition, his NAAG bio cited his creation of a statewide internet safety initiative to target online nuisances from child bullies to sex predators. His efforts to fight cyber sex-crime earned him a Champion of Online Safety Award and was considered a standout feature of his leadership. Gansler served as President of the National Association of Attorneys General from 2012-2013.

Shortly after graduating from law school, Gansler worked as a clerk for Judge John C. McAuliffe on the United States Court of Appeals. Admitted to the Maryland Bar in 1989 and the District of Columbia Bar in 1990, he joined the private practice law firms of Coburn & Schertler and Howrey & Simon. He remained there for two years. From 1992 to 1998, Gansler was an assistant to the United States attorney general for the District of Maryland. From 1999 – 2007, he served as the state's attorney for Montgomery County.

Additionally, Gansler has served in a number of other roles including:

Democratic primary for Governor of Maryland

Rushern Baker III and Douglas F. Gansler are running in the Democratic primary for Governor of Maryland on June 28, 2022.

Gansler announced in June 2013 that he would not seek a third term as attorney general in order to pursue election to the open governor's seat in 2014. Gansler launched his gubernatorial campaign on September 24, 2013. Democratic incumbent Martin O'Malley was termed-out in 2014, leaving the seat up for grabs. Gansler lost the primary election on June 24, 2014. The general election took place on November 4, 2014.

Former Lieutenant Governor Anthony Brown officially launched his 2014 gubernatorial campaign on May 10, 2013. If he had won, Brown would have been the first lieutenant governor since the position was created in 1970 and first black candidate to be elected governor of Maryland. O'Malley, with whom Brown shared winning tickets in both the 2006 and 2010 elections, supported Brown as his successor. Brown's lieutenant gubernatorial running mate was Howard County Executive Ken Ulman. Immediately after formalizing their partnership for the 2014 campaign, the Brown-Ulman ticket received the endorsement of U.S. Rep. Elijah Cummings (D-MD). A number of Cummings' congressional colleagues announced their support soon thereafter, as well as branches of SEIU, a labor union.

On July 17, 2013, another candidate entered the Democratic primary field: Del. Heather Mizeur. Mizeur would have been the first female governor of Maryland, as well as the country's first openly gay governor, if she had won the general election. Former state Attorney General Doug Gansler also sought the Democratic nomination for governor in 2014. On Oct. 14, 2013, Gansler selected Prince George County Delegate Jolene Ivey as his lieutenant gubernatorial running mate. After joining Gansler's campaign, Ivey stated, "I am proud to be the first African-American woman to run for lieutenant governor, and when we win, to be the first Democratic African-American woman to be lieutenant governor in our nation's history." Both Gansler and Mizeur lost in the Democratic primary on June 24, 2014.

The Republican ticket of Larry Hogan and Boyd Rutherford emerged from a field of four potential tickets after the June 24 primary. The winning ticket managed a 14-percent margin of victory over Harford County Executive David Craig and state Delegate Jeannie Haddaway-Riccio. Hogan and Rutherford were both former appointees of former Gov. Robert Ehrlich (R).

National figures in the race

In October 2013, one month after Gansler launched his 2014 campaign for governor, The Baltimore Sun published a photograph featuring the attorney general standing in the midst of a raucous high school party. The photo had been taken in June of that year at a high school graduation celebration, co-hosted and attended by Gansler's son, and found its way into the public domain via Instagram. It captures a scene containing evidence of underage alcohol consumption, with Gansler standing passively among the shirtless partygoers. The Sun's accompanying written report evokes a permissive attitude unbecoming of a top law enforcement official. It reminds readers of the second term AG's pronouncements about wanting to reduce underage drinking, using the photo as a visual aid to reinforce the notion Gansler was neglecting his duties in not shutting down a party where, by his own acknowledgement, "For better or worse, the reality is some kids drink alcohol while they're there." After the story broke, Gansler defended his lack of engagement as appropriate from a parental perspective, considering he and a group of other parents had established rules for the party in advance. Skirting a direct response to claims that his behavior was inappropriate from a law enforcement perspective, Gansler argued that it would have been outside his moral authority to stifle a relatively controlled demonstration of teenage debauchery, as depicted. One teenager who attended the Delaware beach house celebration that night told an interviewer from the Sun, "I don't remember much, but it was one of the best parties I've been to, hands down," simultaneously affirming Gansler's defense of his responsibilities as a parent within the situation and the critics' charges that Gansler actively ignored his responsibilities as an elected legal official.

Before the Sun published the photo, Gansler's candidacy had already suffered a string of embarrassments, mostly courtesy of the Washington Post, which kicked off its Gansler-exposé series in August when it revealed previous comments Gansler had made about the campaign of his opponent, Lt. Gov. Anthony Brown, who was the early frontrunner for the Democratic gubernatorial nomination. "I mean, right now, his campaign slogan is, ‘Vote for me, I want to be the first African American governor of Maryland,’" Gansler told some campaign volunteers, implying Brown was running on gimmick rather than substance. It followed with a number of reports detailing Gansler's questionable handling of state-issued vehicles, including a piece saying he ordered state troopers to violate traffic laws.

A little over three months after he delivered a legal opinion recognizing "out-of-state marriages between same-sex couples" in Maryland, Gansler made the issue the highlight of his re-election campaign. Unlike any other politician within the state, he was quite vocal in declaring that a "prohibition of gay marriage is a clear violation of equal protection."