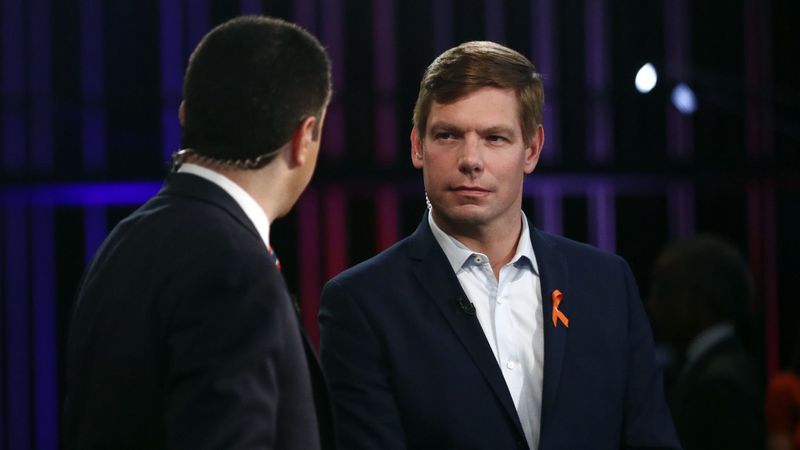 Rep. Eric Swalwell (D-Dublin) had languished for months near the bottom of the polls on the 2020 race for the Democratic presidential nomination.
(Brynn Anderson / Associated Press)

Rep. Eric Swalwell abandoned his uphill run for president Monday and announced that he will instead seek a fifth term in the House.

The 38-year-old congressman from the Bay Area city of Dublin had languished for months near the bottom of Democratic polls. He had sought to cast himself as the candidate of a younger generation but was eclipsed by Mayor Pete Buttigieg, 37, of South Bend, Ind., and former Rep. Beto O’Rourke, 46, of Texas.

After canceling a July 4 visit to New Hampshire — the first primary state — Swalwell scheduled a news conference Monday in his East Bay district, where he announced his decision.

“Today ends our presidential campaign, but it is the beginning of an opportunity in Congress,” Swalwell said.

Swalwell reviewed his poll numbers and fundraising status after the June 27 Democratic debate and concluded his candidacy was no longer viable. “We wanted to be honest with ourselves and with our supporters,” he said.

His departure from the race could be the first of many. The Democratic National Committee has set increasingly difficult criteria for candidates to qualify for upcoming debates, which could bar a large group of them from the stage in September. Those left out will inevitably find it harder to garner the attention or raise the money they need to sustain their campaigns.

As Swalwell quit the race, Tom Steyer, a fellow Californian who seemingly ruled out a 2020 presidential run, was preparing to announce that he changed his mind.

The San Francisco billionaire, a former hedge fund chief, aims to enter the campaign for the Democratic nomination this week, according to a source close to Steyer. The liberal activist had announced in January that he would not pursue a White House bid, but kept the prospect faintly alive by saying he was not running “at this time.”

Swalwell had sent mixed signals on his intention to run for reelection if his presidential campaign failed. In February, before announcing his candidacy, Swalwell told the San Francisco Chronicle he would “burn the boats” and not look back on his House seat.

“I would want people to know that I’m putting my all into this and I don’t have a life insurance policy,” he said. But more recently, Swalwell wavered in his vow to seek the presidency or bust.

The highest-profile moment of Swalwell’s run was a widely mocked attempt in the debate to cast Democratic front-runner Joe Biden as too old.

Swalwell said the former vice president, 76, “was right when he said it was time to pass the torch to a new generation of Americans 32 years ago; he is still right today.”

“I'm still holding on to that torch,” Biden replied.

But even that moment was overshadowed by California Sen. Kamala Harris confronting Biden for opposing forced school busing for racial integration in the 1970s.

Swalwell, a member of the House Intelligence and Judiciary committees, is a cable TV fixture known as a relentless critic of President Trump. The former Alameda County prosecutor sought to make gun control a central focus of the Democratic primary.

He also liked to call attention to his roots in rural Iowa, which casts the first ballots of Democrats’ presidential nominating process. Swalwell lived in Iowa until he was 5.

In 2010, he was elected to the Dublin City Council. A few months after taking office, he launched an improbable campaign to oust fellow Democrat Pete Stark from Congress after 20 terms. Swalwell succeeded and was reelected three times.

As he left the presidential race on Monday, Swalwell paraphrased a passage from the Louis L’Amour novel “Lonely on the Mountain”: “There will be a time when you believe everything is over. That will be the beginning.”