GOP clamors for Trump in Georgia, but he’s MIA

The president has made no public remarks about Senate runoffs that will determine Senate control and, for now, has no plans to travel there. 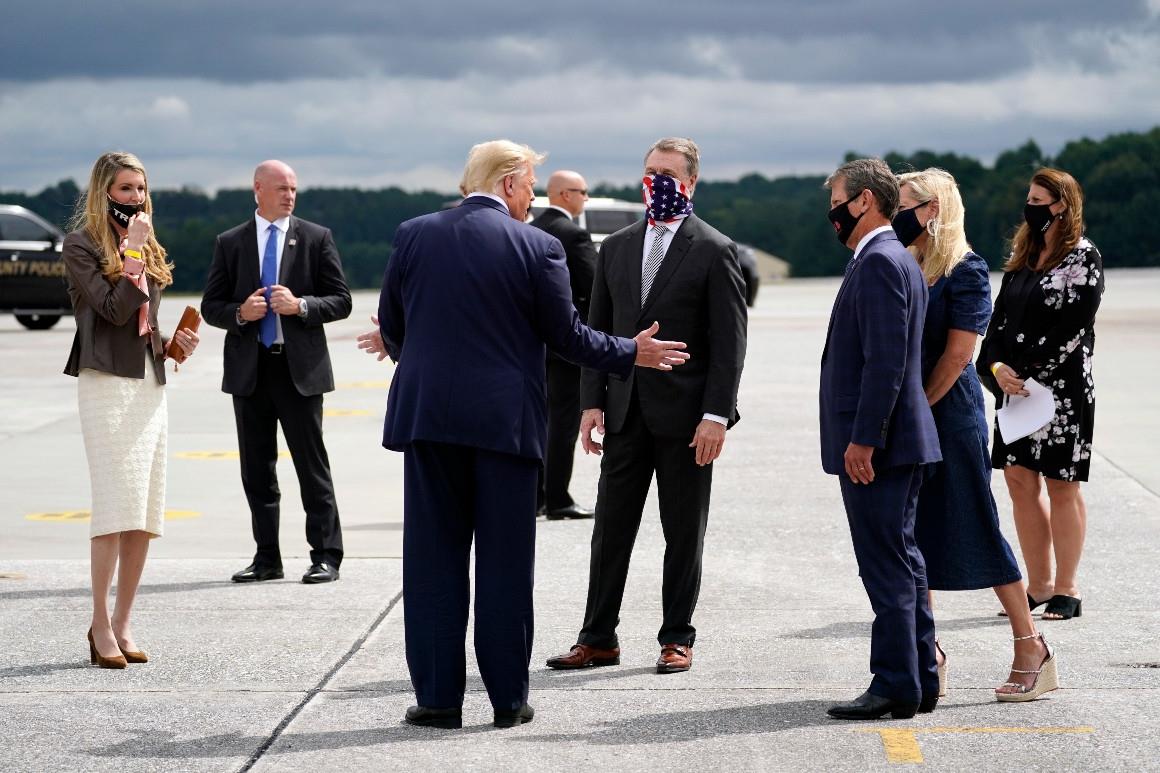 
Georgia is at the center of a battle for Senate control. Yet President Donald Trump, America’s omnipresent political commentator, has remained mum.

Two runoff Senate races in Georgia, set for Jan. 5, will determine which party controls Congress’s upper chamber. Marquee political names like Vice President Mike Pence and former President Barack Obama are willing to make Georgia trips to rally supporters. Big donors from both parties are funneling money into the races. The state is even embarking on a hand recount of its presidential ballots as the Trump campaign challenges Georgia’s election results in court.

But back in Washington, Trump has been all but silent on the subject. Outside of a few scattered tweets and retweets about specious claims of voter fraud in Georgia, Trump has made no public remarks about the state or the Senate runoffs there. And there are no plans for him to visit Georgia until at least after the state’s recount is complete. In fact, apart from a silent appearance at Arlington National Cemetery on Veterans Day, Trump hasn’t appeared in public since two days after the election, and it’s unclear when he’ll resurface.

His avoidance of the Georgia runoffs has left some Republicans around Trump frustrated that the GOP’s preeminent figure is leaving his party in the lurch at a critical moment. Trump’s rallies and appearances, they argue, are a guaranteed way to drive interest in the state’s two GOP Senate candidates: Kelly Loeffler and David Perdue. And, they noted, the Trump campaign’s focus on legally challenging the presidential election has spread out GOP resources and money that some wish would be funneled into Georgia.

“Several people have told him it’s important Loeffler and Perdue win because they will help keep his legacy intact. We’ve made the point to him that Republicans slowly dismantled parts of Obama’s legacy when we had control of the Senate in 2016 and a Democratic Senate would do the same to Trump,” said a Republican close to Trump.

“I’ve told the campaign his only priority should be holding onto the Senate,” the person added. “Frankly, he is losing credibility the more and more we have this fraudulent ballot fight.”

The silence is all the more notable given Trump’s past involvement in Georgia’s Senate politics.

Indeed, the recount is where the Trump team has focused its attention in the state.

On a call with reporters Wednesday, Trump campaign officials praised Georgia Secretary of State Brad Raffensperger for choosing to conduct a manual recount of ballots cast in the presidential race and said they planned to forge ahead with their plans to reveal voter fraud and voting irregularities, but did not offer additional evidence.

“It’s going to be a process, and people are just going to have to be patient with the ultimate goal of the president being reelected,” said Trump campaign communications director Tim Murtaugh.

President-elect Joe Biden leads Trump by just over 14,000 votes in the state, which faces a Nov. 20 deadline to certify its results. State election officials said the recount would be done by next Wednesday.

Trump aides made a point of separating their recount efforts from broader GOP attempts to rally support for the two Senate runoffs.

“I want to reiterate that the procedure that has been outlined by the secretary of state at our request is not part of a political strategy, but the absolute best opportunity to determine exactly what happened in the state,” said Trump campaign counsel Stefan Passantino.

But the Trump White House is deploying some of its resources to rallying supporters in the Senate races.

At a lunch Tuesday on Capitol Hill with Republican senators, Pence said he would visit Georgia on Nov. 20 and on Twitter shared a video of Sen. John Kennedy (R-La.) on Fox News saying, “what happens in Georgia is going to determine the future of the United States for the next four years.”

But Jason Miller, a Trump campaign senior adviser, said for now, there are no plans for the president to get involved in the Senate races.

“I would not expect anything prior to his race being decided, but he’ll be supportive to ensure Kelly Loeffler and David Perdue win those races,” Miller said. “If the reported irregularities and concerns with illegally harvested ballots aren’t dealt with ahead of Jan. 5, that could impact Republican chances as well.”

On Thursday morning, White House press secretary Kayleigh McEnany confirmed Trump had no plans to head to the state.

“He hasn't made any determinations on that thus far,” she said, adding that the country would “be hearing from him at the right moment.”

In the two runoffs, Loeffler and Perdue are squaring off against Democrats Raphael Warnock and Jon Ossoff, respectively, after no candidates were able to secure 50 percent of the vote on Election Day. If Republicans win one of the runoffs, they will secure control of the Senate. Democrats must win both races to gain 50 Senate seats and take back an effective Senate majority (Vice President-elect Kamala Harris would serve as the tie-breaking vote). Given the high stakes, the two races have seen an influx of fundraising dollars and national attention.

Other GOP senators, like Marco Rubio and Rick Scott from nearby Florida, have gotten involved in the races. Rubio attended a “Save Our Majority” rally in Atlanta on Wednesday, and Scott released a new ad in Georgia taking aim at Senate Democratic Leader Sen. Chuck Schumer.

“This is literally, you know, the showdown of all showdowns in terms of politics and what it means,” Rubio said. “And we don't want to win one of them, we want to win both of them. We need to win both."

Tens of millions of dollars have poured into the state. One top Republican fundraiser said the party has seen new donors appear, particularly those who did not participate in the 2020 presidential race. High-dollar fundraisers are in the works not only in Georgia, but in Florida as well.

“The people who can tolerate the Biden presidency but not a Democratic majority in the Senate are coming out of the woodwork,” said the fundraiser. “People aren’t in the mood to leave things to chance. There’s a kind of renewed sense of activism from people, especially those who sat out or didn’t write the checks they could have in the presidential campaign.”

A Republican strategist working on the races in Georgia noted that while the president has so far been absent from their runoff efforts in the state, his son, Donald Trump Jr., made a visit. They remain hopeful the president will get involved.

“There has been some activity from Trumpworld, but they’re trying to determine exactly what the president is walking into here because of the recount,” the strategist said.

But with the president, there are risks, said the Republican close to Trump.

“He would probably draw a larger crowd size than even his pre-election rallies,” the person said. “The only concern some people have is that he could say something out of whack on stage that would jeopardize his campaign’s legal challenges.”