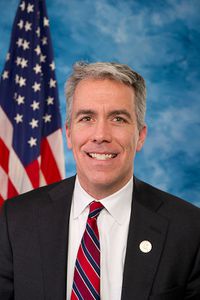 William Joseph "Joe" Walsh (b. December 27, 1961) was a Republican member of the U.S. House of Representatives. Walsh was elected by voters from Illinois' 8th Congressional District. Walsh ran unopposed in the Republican primary on March 20, 2012. He was defeated by Tammy Duckworth (D) in the general election on November 6, 2012.

Walsh announced that he was running for president of the United States on August 25, 2019.

Based on an analysis of bill sponsorship by GovTrack, Walsh was a rank-and-file Republican.

Walsh was considered a potential candidate for Illinois' U.S. Senate seat in 2016. However, he did not file to run.

Walsh was born and raised in the 8th District, growing up in a family of 9 children. He has a B.A. in English from the University of Iowa and a Master's in Public Policy from the University of Chicago. He has taught American government and American history at the community college level for a number of years, at Oakton Community College and the Hebrew Theological College.

An election for president of the United States will be held on November 3, 2020. Walsh announced that he was running for president on August 25, 2019.

Walsh was considered a potential candidate in the 2016 election for the U.S. Senate, to represent Illinois. He ultimately decided against seeking election to the seat.

Walsh lost to newcomer Tammy Duckworth. Walsh was running in the 2012 election for the U.S. House, representing Illinois' 8th District. Walsh sought the nomination on the Republican ticket. The signature filing deadline was December 27, 2011, and the primary took place on March 20, 2012.

Walsh ran unopposed in the Republican primary on March 20, 2012. Tammy Duckworth defeated candidate Raja Krishnamoorthi in the Democratic primary. Walsh was defeated by Duckworth in the general election on November 6, 2012.

An October 2012 article in The Daily named Walsh one of the 20 worst candidates in 2012. He was criticized for comments he made about Duckworth during the campaign, including diminishing her military record. After referring to John McCain as a "noble hero" for not often talking about his service record, he said of Duckworth, “Now I’m running against a woman who, my God, that’s all she talks about.”

On November 2, 2010, Walsh won election to the United States House of Representatives. He defeated Melissa L. Bean (D) and Bill Scheurer (Green) in the general election.