"America isn’t just my home and my country — it’s always been a promise for a better life. A promise that every American deserves."

Julián Castro is a former U.S. secretary of housing and urban development who served during the Obama administration from 2014 to 2017.

Castro announced that he was running for president of the United States on January 12, 2019. He said he achieved universal preschool in San Antonio during his time as mayor and would do the same nationally. Castro has also promoted Medicare for All and housing affordability.

Prior to serving in the Obama administration, Castro was the mayor of San Antonio for five years. He also served on the San Antonio City Council, representing District 7.

Castro was born in 1974 and grew up in San Antonio, Texas. He graduated from Stanford University with a B.A. in political science/communications in 1996 and received his J.D. from Harvard Law School in 2000. Castro was elected to the San Antonio City Council in 2001. At the age of 26, he was the youngest council member in the city's history.

Castro did not seek re-election to the city council in 2005, instead running for mayor of San Antonio. He lost that election but ran again in 2009 and won with 56% of the vote. He was re-elected in 2011 and 2013. During his second term as mayor, Castro delivered the keynote speech at the 2012 Democratic National Convention.

Castro served as mayor until 2014, when President Barack Obama (D) named him U.S. secretary of housing and urban development. The Senate confirmed his nomination by a vote of 71-26. Castro filled this position until the end of Obama's second term in 2017.

In 2018, Castro published a memoir entitled, An Unlikely Journey: Waking Up from My American Dream.

Below is an abbreviated outline of Castro's academic, professional, and political career:

Castro delivered the keynote address at the Democratic National Convention in 2012. The full speech can be viewed here.

1. Do you support the federal regulation of greenhouse gas emissions?
- Unknown Position

Do you support the regulation of indirect campaign contributions from corporations and unions?
- Unknown Position 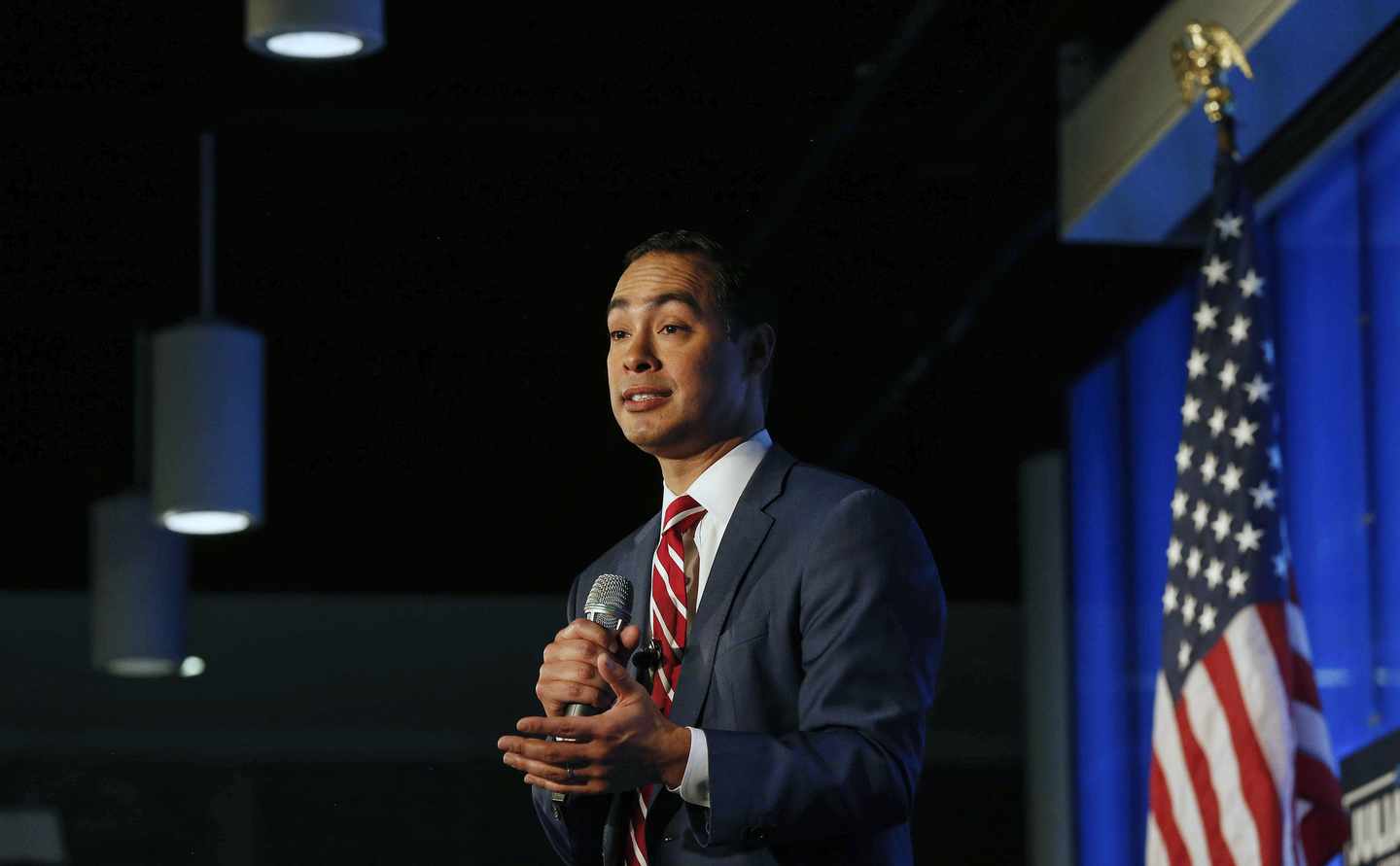 WASHINGTON -- Former Housing and Urban Development Secretary Julian Castro announced Thursday that he was bowing out of the 2020 Democratic primary. The only reason to notice or care is that Castro was one of the more shrill candidates, so it's good that he never found purchase in the crowded field and hence had to "suspend" his campaign. Like Kamala Harris, the California Democratic senator who dropped out in December, Castro has been part of the left's "cancel culture" that seeks to silence those with differing views rather than to debate in the marketplace of ideas. Harris tried to stand out in the primary by telling Twitter to cancel President Donald Trump's account "as a matter of safety." She must have known the stunt would fail, but clearly figured that advocating to censor a Republican president was a shrewd career move. Amen to that not working. Over the summer, Rep. Joaquin Castro, who is the former HUD secretary's twin brother and closest ally, tweeted the names and occupations of 44 constituents in his San Antonio district who had contributed the maximum amount -- $2,800 per election -- to the Trump campaign. Their contributions, the House Democrat explained, "are fueling a campaign of hate," and he argued that the anti-immigrant manifesto written by the El Paso shooter who left 22 innocents dead "could have been written by the people that write Trump's speeches." The former HUD secretary explicitly supported his brother naming names. From the start, the congressman was wrong to link Trump to the El Paso shooter. The shooter said he reached his views on what he called a "Hispanic invasion" before Trump launched his 2016 campaign. There is no linkage here, only political opportunism. Widening the circle of blame to Trump donors only expands the list to include more people who had absolutely nothing to do with the El Paso slaughter. Why would anyone who is duly appalled at those murders want to do that? On MSNBC's "Morning Joe," Castro argued it was not his intent that Trump donors be harassed; besides, donor names are public record. "What I would like for them to do is think twice before supporting a guy who's fueling hate in this country," he said. That's the classic guilt-by-association tactic that hangs on the lie that all Trump supporters must be racist. Know that when a congressman tweets the names and other information about Trump donors, he is inviting intolerant co-believers to lash out at Trump supporters in inappropriate ways. It's amazing how often partisans who say they want to stop hate and protect the innocent are happy to throw gasoline on the fire in a quest to establish their moral superiority. And that's no way to win in 2020, by going after Trump donors for fueling hatred. Former President Barack Obama understands that. At an event in Chicago in October, Obama admonished younger voters for demanding purity and jumping on social media to show how "politically woke" they are. "The world is messy. There are ambiguities," Obama noted before he panned those who believe "the way of me making change is to be as judgmental as possible about other people." Obama called out those who tweet against others for something they said and then pride themselves for being so strong on social justice. "That's not activism," Obama added. "That's not bringing about change." The exit of Castro and Harris also shows that excelling in the smug factor is not the ticket to winning the Democratic nomination. Source: https://www.realclearpolitics.com/

Cory Booker and Julian Castro Should Form a Ticket 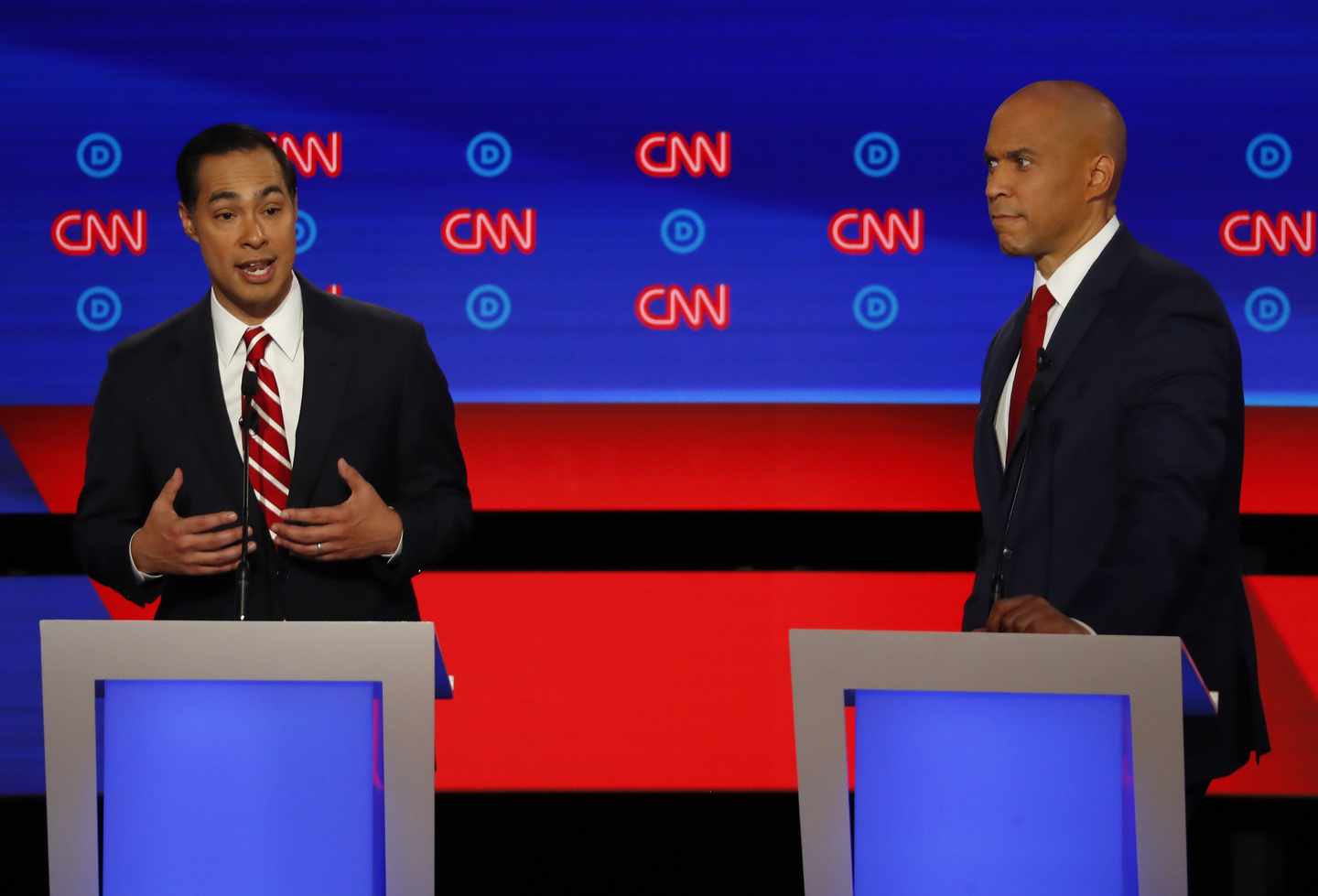 After failing to poll strongly enough to qualify for Thursday’s Democratic presidential primary debate, Sen. Cory Booker is now calling for the Democratic National Committee to loosen its criteria for inclusion in the January and February debates. Last week, another candidate who can’t get on the debate stage, former Housing and Urban Development Secretary and San Antonio Mayor Julian Castro, hosted a town hall in Iowa to lecture voters about how their nearly all-white state has disproportionate influence in determining the nominee. If these two are trying to jump-start their sputtering campaigns, they are going about it the wrong way. They can’t complain their way to the nomination. They can’t blame the process. The onus is on them to earn more support. Booker’s gambit is slightly more worthwhile than Castro’s. Whatever your opinion about the Iowa caucuses, they aren’t going anywhere. If you can’t do well there – and by “well,” historically speaking, that means at least third place – you’re probably not going to do well anywhere else. Booker at least got all seven candidates who did qualify for the upcoming debate, as well as Castro, to sign his formal request to the DNC. His letter seeks to shame the DNC into adopting lower thresholds by implicitly drawing attention to the fact that the stage is now almost completely composed of white candidates, whereas helping Booker and Castro get back in helps diversify the proceedings. But that seemingly united front probably won't sway the DNC, because what the party wants most is an early nominee. Narrowing the debate stage nudges voters towards making a final decision by the Super Tuesday set of primaries on March 3. Reverting to sprawling debates risks dragging out the winnowing process and, in the worst-case scenario, leading to a contested convention that could fatally divide the party. Even if the DNC caves under pressure, the fundamental problem for Booker, and for Castro, wouldn’t be solved. Both have already been in most of the debates, and neither made enough of an impression on voters to rise from the bottom of the polls. How would one more debate appearance change anything? Booker and Castro don’t need another TV appearance in which they are a literal sideshow, taking up space on the edges of the stage while most viewers focus on the front-runners in the middle. In order to seize the spotlight, the two need a radical change in campaign strategy. The easiest way to do that? Join forces. Announce the formation of a Cory Booker-Julian Castro ticket. This would pair not just two people of color, but also two people with real-world governing experience at the mayoral and federal level. Two people who can bridge the divide between North and South. Two people with youthful energy who represent America’s future. By teaming up (with Booker, as the one with higher poll numbers, presumably in the top slot) they would instantly attract the major media coverage that has largely eluded them all year. Of course, after the initial novelty wore off, they would still have to deliver a message that resonates with voters. But they could at least make the case that they share important perspectives and offer unique ideas (in particular, Booker’s signature “baby bonds” plan to give every child at least $1,000 every year in a saving account they can access once they turn 18) that won’t be found on the December debate stage. The early-ticket gambit hardly guarantees the nomination. In the 2016 Republican presidential primary, Sen. Ted Cruz tried to out-maneuver Donald Trump by naming businesswoman and presidential primary dropout Carly Fiorina as his running mate. But Cruz did so in April 2016, after most states had already voted and Trump had a wide lead. It was literally a last ditch effort; after losing the Indiana primary one week after tapping Fiorina, Cruz quit. Booker and Cruz are in desperate straits as well, but the first contest in Iowa is seven weeks away. The two would have time to criss-cross the Hawkeye State, get a second chance to make a first impression, and see if they can create some synergistic magic, as Bill Clinton and Al Gore did when they first partnered 27 years ago. One tough criticism they would likely face is that by taking this step now, they would be foreclosing the possibility of having a woman on the ticket. There’s no answer they could give that would satisfy everyone. But they could at least note that a winning ticket comprised of an African American and a Latino would also make history, and then they could promise that women would be heavily represented and empowered in their Cabinet. If Booker and Castro want to get back in contention, they need to show strength. Complaining about process is what losers do when they don’t want to accept responsibility for their own weaknesses. A joint-ticket primary campaign is an opportunity to show strength and confidence, effectively demanding attention from voters and reporters by doing something essentially unprecedented, and stoking interest in what may come next. The two have an uphill battle ahead of them no matter what. They might as well face their challenges together.Source: https://www.realclearpolitics.com/