The California senator noted that nearly 225,000 deaths have been linked to COVID-19 since the first case was discovered in March, a figure which doubles the death toll of the first world war and makes up half as many deaths recorded from the second world war. Harris said Trump knew about the seriousness of the pandemic as early as Jan. 28 but didn’t relay that information to the public until it was too late.

Harris held an outdoor drive-in rally at UAW Local 654 in Pontiac Sunday. Mable Lynch watched Harris speak from the safety of her car, which displayed a sign reading “My son could still be alive."

Lynch’s son, a father of two, died in late March at the age of 51 from COVID-19, leaving a “deep void” in her family. Lynch feels the Trump administration hasn’t taken responsibility for the pandemic and is “playing with our lives."

“I can’t even visit my friends who are here. I’m just so broken. I’m just so hurt,” Lynch said. “ I can’t even be a part of (this rally) because I have to go home to my husband, who would be so terrified if he even thought I got near all those people."

Harris visited Michigan with nine days left until the Nov. 3 election, making the case for Democratic nominee Joe Biden at campaign stops in Southfield, Detroit, Troy and Pontiac. The vice presidential nominee said each Michigan voter, more than 2 million of whom have already cast a ballot, holds significance in the upcoming election.

“You all in Michigan will determine who will be the next president of the United States and the next vice president," she said. “This is about seeing it through and getting the job done.”

Lt. Gov. Garlin Gilchrist indicated he pushed the Biden campaign to see the importance of coming to Pontiac. He said Sunday’s event is a “launching pad to a historic moment."

Supporters in Pontiac were excited to see a presidential campaign spent time in their community. Tamara Nelson, a 62-year-old Auburn Hills resident, said she hopes it motivates younger voters to turn out in this election.

“Everybody goes to Detroit, but to come here to Pontiac is very important because we are often overlooked,” she said. “The one thing I think will be different in this election is what will happen after. I think the movement will still continue. People are so energized and realize that it doesn’t just start and stop with a protest, it continues.”

Livonia resident Hermant Shah said Biden’s campaign needs to work harder to meet voters in the suburbs north of Detroit. He described Harris as a "great fighter for the women and the middle class.”

“He’s kind," Jamerson said of Biden. “He not an immature child, unlike Trump. I’d rather have a leader who focuses on issues like the coronavirus.”

Detroit resident Ada Nicole Smith, 42, said “representation matters" in the White House. Smith said Harris' inclusion on the ticket has invigorated young women and Black voters who could see themselves reflected in her candidacy.

“I think (Trump) has a base, we know they are motivated,” Smith said. “But the people are going to speak. He did not win the popular vote last time, so I think some people have taken steps to educate themselves on the Electoral College and how that works. People didn’t understand that (last time). People are fed up and this is the people’s chance to speak.”

Biden holds a steady lead in polls of Michigan voters taken in October. The former vice president visited on Oct. 2 and Oct. 16 while keeping up a steady schedule of surrogate visits this month.

Surrogates like Harris, Lizzo, Gov. Gretchen Whitmer, and former Democratic primary candidate Pete Buttigieg have held events across Michigan encouraging voters to cast an early ballot. They’ve all urged that every vote could make the difference in a tight race.

Trump won Michigan by only 10,704 votes in 2016, the highest margin of any state in the country. Michigan Democrats cast 295,730 fewer votes for Hillary Clinton compared to the previous presidential election, and Harris noted that Clinton lost Michigan by an average of only two votes per precinct.

Trump told reporters Saturday that he’s encouraged by polling from Trafalgar Group, the only pollster that correctly predicted his 2016 win in Michigan. Trafalgar is again alone in polls finding Trump leading in Michigan.

Republican National Committee Chair Ronna McDaniel said she’s not concerned about Biden’s advantage in the polls during an interview Sunday.

“Here’s what we’re seeing on the ground: We have a ground game bigger than we had in 2016, the enthusiasm is higher than it’s ever been and the President has a winning message for Michiganders, especially with what he’s delivered with the USMCA, lowering taxes and actual policies that have made our lives better,” she said.

When she landed in Detroit, Harris told reporters that Trump’s handling of the coronavirus is “the greatest failure” of any administration in U.S. history. She sharply criticized White House Chief of Staff Mark Meadows for saying “we’re not going to control the pandemic" during a CNN interview Sunday.

COVID-19 cases are rising across the country, including Michigan. The Michigan Department of Health and Human Services has recorded a steady rise in the 7-day average of new confirmed cases throughout October reaching 2,304 cases per day on Oct. 24.

There have been 158,026 confirmed cases and 7,182 deaths linked to the virus since March 10. The virus has killed more people in Southeast Michigan than anywhere else in the state, causing 1,665 deaths in Detroit and 1,380 deaths in Wayne County.

Trump is planning to hold a rally at the Capital Region International Airport in Lansing Tuesday. His past events have attracted thousands of supporters packed in close proximity, many who do not wear masks or observe social distancing guidelines. 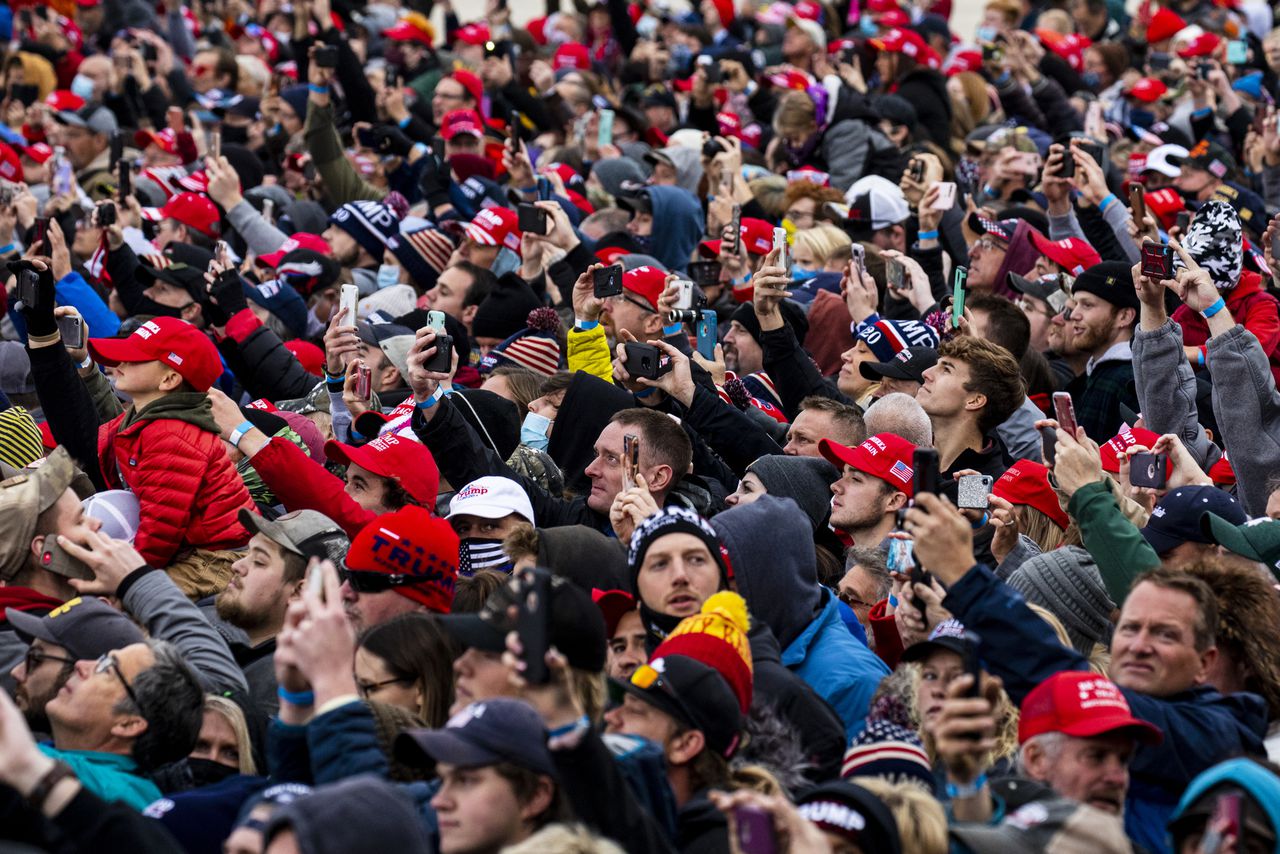 McDaniel was in Lansing Sunday during a bus tour across Michigan. McDaniel was diagnosed with COVID-19 in early October but has since recovered.

McDaniel said her experience with the virus gave her perspective on how “incredibly contagious” it is. She touted the administration’s efforts to increase testing and develop a vaccine, which is not yet available.

McDaniel said the “vast majority of people are wearing masks” at the president’s rallies, but also said “there is personal accountability and people are making decisions based on their health and what they’re comfortable in.”

“Well let’s remember the mortality rates are down,” McDaniel said. “This is an incredibly contagious virus and it’s spiking all over the world again, we’ve never seen anything like this. So what’s really sad is to see it being politicized and a blame game being played when we know that the President’s decisive action early on saved lives.”

According to John Hopkins, 2.6% of cases in the U.S have resulted in deaths. A total of 224,889 deaths are attributed to the virus. Michigan’s statewide fatality rate is at 4.5%.

MLive did not observe anyone without a mask at Harris’ Pontiac event, though several dozen supporters crowded around the front of the stage and didn’t observe social distancing recommendations. A majority of attendees remained in their cars when asked by the campaign over the loud speaker.

Harris' events in Detroit and Troy attracted 200 supporters and 120 supporters, according to the campaign. There were roughly 90 vehicles at the drive-in rally in Pontiac. 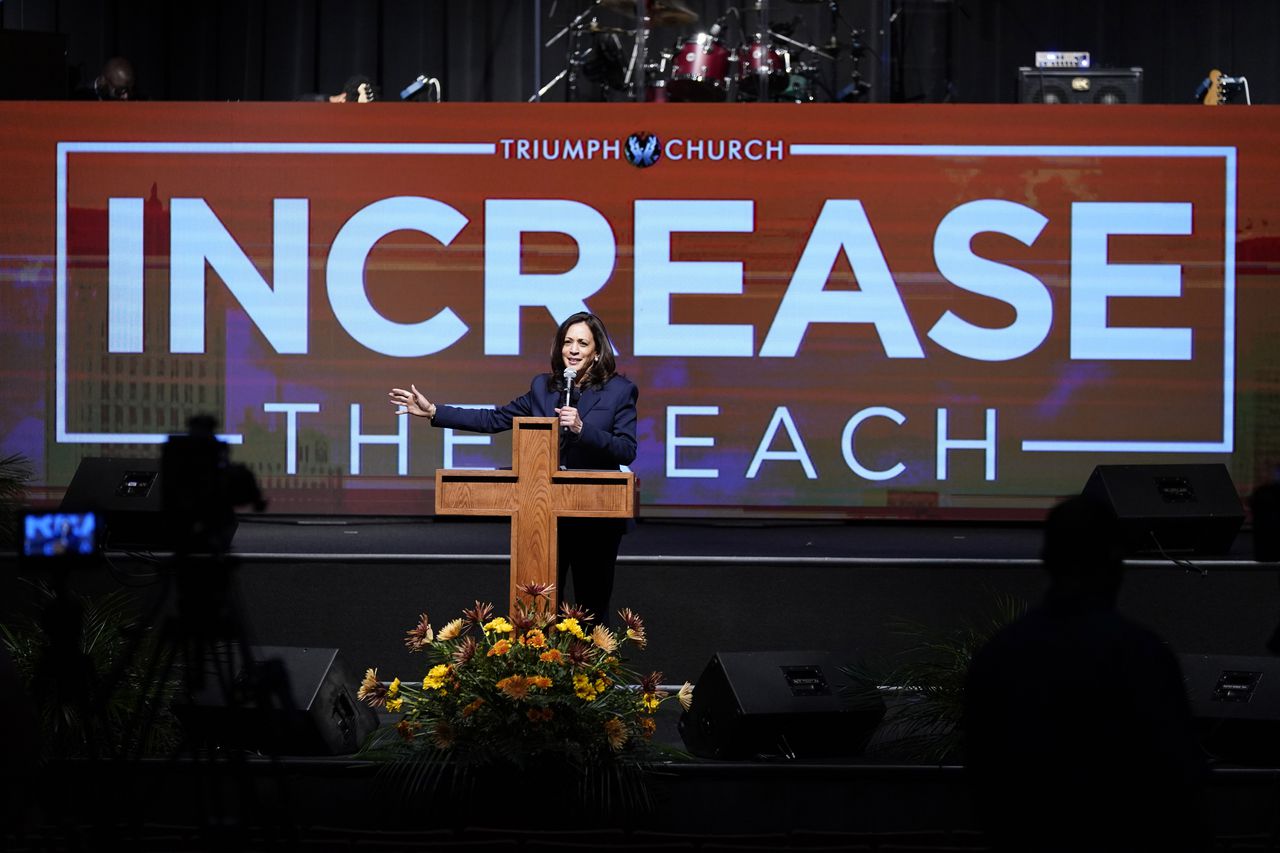 Earlier in the day, Harris stopped in during the Sunday service at Triumph Church in Southfield. She was introduced by Pastor Solomon Kinloch, who is the brother of the Michigan Democratic Party’s 13th Congressional District chair.

The church held under two dozen people inside, with others watching the service through a livestream or from their cars as it was projected on a screen set up in a nearby parking lot.

“I know this isn’t how we usually do church, but it is a reminder, pastor that faith always finds its way,” Harris said. “We need to always feel the grace of God and to be at church, even if it’s in our car or at home.”

Harris said she’s seen front-line workers who are filled with strength as she travels the country. She said people “reject the notion that we cannot control this virus” and know that leaders should alleviate pain and suffering during a “moment of crisis.”