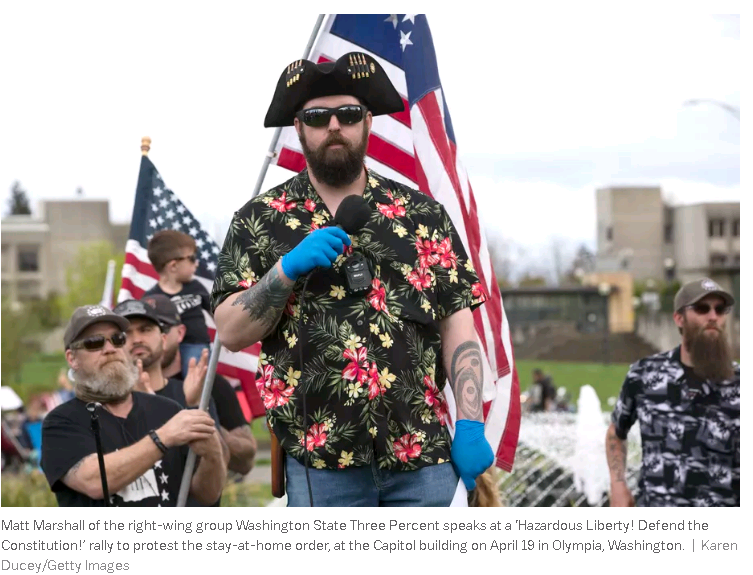 Worldwide, the number of coronavirus cases topped 2.4 million. The United States accounts for nearly 762,000 of those recorded infections, as of April 20.

The United States is very much still in the middle of a public health crisis, yet the pain of the pandemic is not spread equally across the country. That’s why protesters in some states are beginning to agitate against the lockdown restrictions that have slowed the spread of the outbreak but have also suffocated the economy.

Protesters in Colorado, Texas, and elsewhere are demanding the government reopen schools and businesses in their states, even though public health officials say doing so too soon risks a surge of infections and that any rollback must be gradual. Even though recent polling has shown that a majority of Americans fear what might happen if stay-at-home orders are lifted too soon, the fault lines are growing deeper, with some of the tumult being fomented by the president himself.

Experts say that any plans to reopen will need to include large-scale testing and contact tracing, along with ways to show who has been infected by the disease and whether they’ve gained any immunity. Antibody tests are starting to be rolled out, but questions remain about their accuracy and availability.

But a little more economic relief may be on the way as Congress and the White House near another stimulus package, which will include hundreds of billions more for small businesses. The small-business assistance passed in the first coronavirus stimulus bill has already run out of money.

Protests over the shutdown grew louder over the weekend

Maybe nothing sums up the current moment quite like these photographs from Alyson McClaran, a photojournalist in Denver, Colorado, of health care workers in surgical masks and scrubs standing in the middle of city streets to block people — many in cars — who came out to protest against the stay-at-home measures. Demonstrators across the country — from Maryland to Indiana to Texas — gathered outside state capitols over the weekend in defiance of lockdown restrictions. They’re angry about the shutdown measures that have upended the US economy, shuttering businesses and leaving at least 22 million people unemployed.

These protesters are still a minority, organized largely by right-wing and anti-government activist groups. But they’re an increasingly vocal and visible minority, with echoes of the early days of the Tea Party. And they are being egged on by President Donald Trump, who tweeted last week about “liberating” states.

Rolling out the federal government’s new guidelines for how to gradually reopen some parts of the country, Trump said he would ultimately defer to governors on when it was safe to open up. Yet his tweets seem to contradict that.

Public health officials in his own administration have said that attempting to lift stay-at-home measures too quickly could cause coronavirus cases to spike once again. Dr. Anthony Fauci, the nation’s top infectious disease expert, told Good Morning America Sunday that, unless the US gets the virus under control, “the real recovery economically is not gonna happen.”

“So what you do if you jump the gun, and go into a situation where you have a big spike, you’re going to set yourself back,” Fauci said. “So as painful as it is to go by the careful guidelines of gradually phasing into a reopening, it’s gonna backfire [if you don’t].”

Right now, most Americans agree, according to a recent poll by the Pew Research Center.

Some countries, including Germany, have begun to ease their lockdown restrictions, but they’re taking baby steps: allowing some businesses to reopen with limits on the number of customers allowed in and everyone still expected to follow all other social-distancing restrictions. Bars are still closed, and big gatherings are still banned.

Does the US have the capacity to open up?

Governors and public health experts say that taking even tentative steps toward reopening will require greater testing capacity — more than double or triple what the US is doing now. One study conducted by a panel of experts at Harvard estimated that the US must be able to complete 5 million tests a day by early June and 20 million tests per day by late July to “fully mobilize the economy.”

The US is currently conducting about 150,000 tests per day, according to the COVID Tracking Project, for a population of about 330 million.

The Trump administration has said states must shoulder the testing burden. But governors have resisted, saying the lack of coordination across the country and states’ lack of resources are making that an impossible task to achieve. States need things like swabs and reagents to conduct the tests, which rely on manufacturers and supply chains.

“It’s not accurate to say there’s plenty of testing out there, and the governors should just get it done,” Maryland Gov. Larry Hogan ​said​ on State of the Union​ Sunday.​ “That’s just not being straightforward.”

Hogan announced a deal with suppliers in South Korea to import 500,000 tests to Maryland. Per the New York Times, he was able to secure the deal in large part thanks to his wife, “a Korean immigrant who speaks fluent Korean, had been on the phone in the middle of the night helping to secure the final deal with two labs to sell Maryland the tests.”

Trump has said he will use the Defense Production Act to increase swab production by 20 million per month (though these shortages are nothing new).

And beyond testing for new infections, the US still needs a better grasp on who might have recovered from the virus. Serological tests, which test for antibodies, might help gather this information and show who has gained some immunity. This may allow some people to return to the workforce.

There are still a lot of questions about the coronavirus, including whether and for how long it might confer immunity, but there’s hope these antibody tests can help piece together this information.

And serological tests are starting to become available: New York is beginning to test antibodies this week from a 3,000-person sample. But there are a lot of questions about their accuracy and efficacy. The Food and Drug Administration has issued emergency use authorization to just four tests, but there are some 90 tests now on the market that haven’t had prior review, according to the Washington Post.

Some critics are saying that it’s now such a free-for-all that it could be even more dangerous if the tests don’t work or offer false results, leading people to believe they have some immunity if they do not. This is especially worrisome if states are relying on these results to determine whether and how to lift lockdowns.

The FDA and other government agencies are now trying to vet the tests, but the risks are real. Just look at the United Kingdom, which paid $20 million for at-home antibody kits from China. They didn’t work

Congress gets close to passing another stimulus deal

Last week, the Paycheck Protection Program ran out of money. The program, which earmarked $349 billion for small businesses, was included in the $2 trillion coronavirus stimulus passed in March. The initiative offers loans to businesses that are forgivable if the businesses maintain their payrolls and essential expenses. But with so many businesses shut down, demand for the program has exceeded the funds available.

Congress wants to give the initiative much more cash, but Republicans and Democrats have been at odds over what to include in this latest round of stimulus. There are signs the two sides are coming close to an agreement on an approximately $450 billion package. It will include about $300 billion in additional money for the Paycheck Protection Program, some of which will be set aside for minority- and veteran-owned and rural businesses. The bill will also include an additional $60 billion for another emergency loan program, another $75 billion to assist hospitals, and $25 billion to expand testing.

Both Democrats and Republicans agree that the small business loan program needs a refresher, but Democrats had held out for more money for hospitals, testing, and for states and local governments that are having to cut their budgets after the expense of battling the coronavirus. Right now, it appears as though the Democrats got the GOP to budge on hospitals, but the states may have to wait for the next stimulus package.

And some good news

Captain Tom Moore is turning 100 years old at the end of April. To celebrate his centennial, the war veteran walked 100 laps in his garden to raise money for the United Kingdom’s National Health Service.

“The sun will shine on you again and the clouds will go away,” he told reporters, referring to the coronavirus crisis. Every day at Vox, we aim to answer your most important questions and provide you, and our audience around the world, with information that has the power to save lives. Our mission has never been more vital than it is in this moment: to empower you through understanding. Vox’s work is reaching more people than ever, but our distinctive brand of explanatory journalism takes resources — particularly during a pandemic and an economic downturn. Your financial contribution will not constitute a donation, but it will enable our staff to continue to offer free articles, videos, and podcasts at the quality and volume that this moment requires. Please consider making a contribution to Vox today