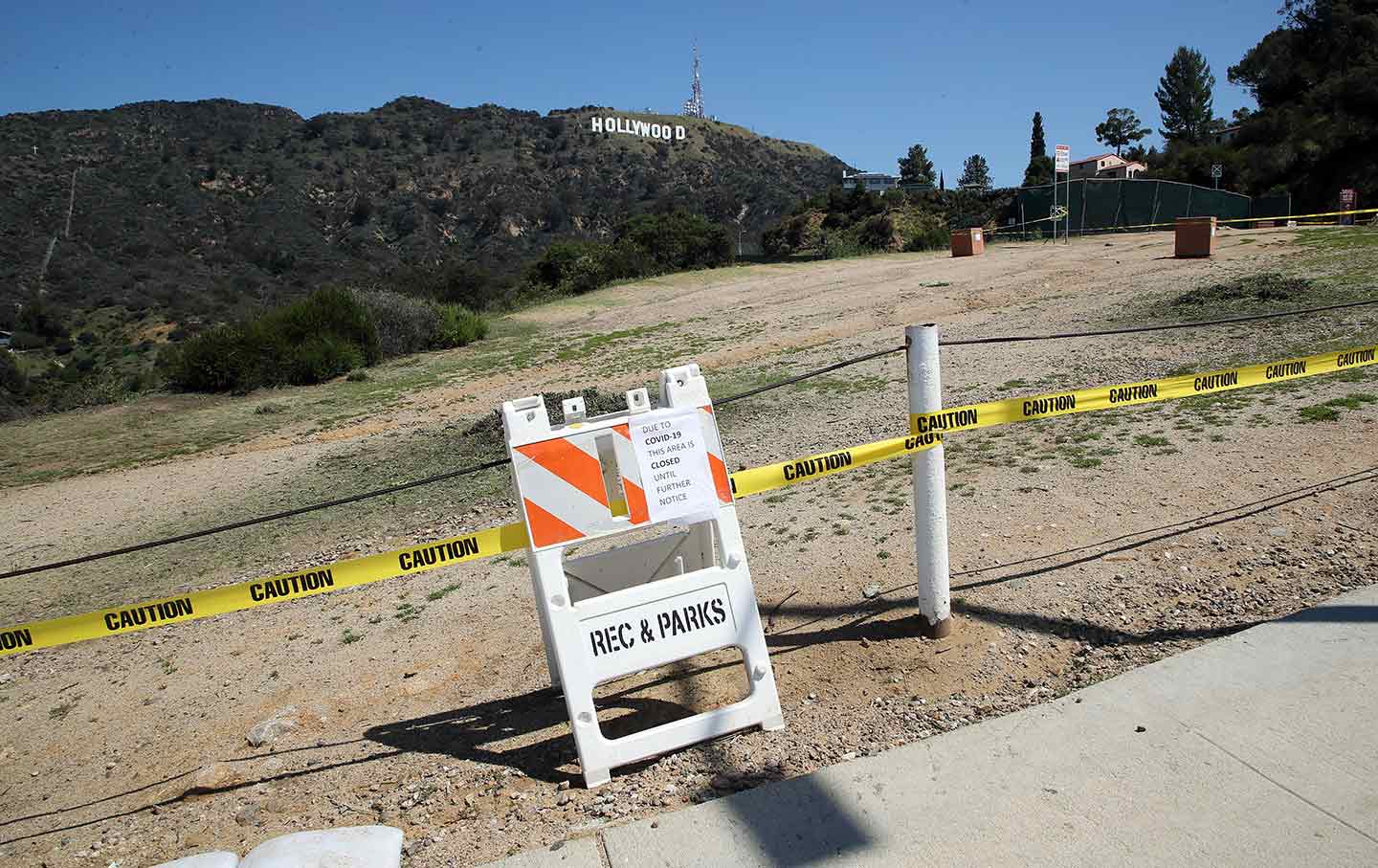 EDITOR’S NOTE: The Nation believes that helping readers stay informed about the impact of the coronavirus crisis is a form of public service. For that reason, this article, and all of our coronavirus coverage, is now free. Please subscribe to support our writers and staff, and stay healthy.

Driving past the Fountain Valley hospital south of Los Angeles, you see something new: a huge white tent in what was the parking lot. To Angelenos, it looks something like the tent that appears downtown Beverly Hills for the Vanity Fair Oscar party. But this one, and others like it outside hospitals throughout Southern California, is not a party tent; it’s a temporary structure designed to deal with the overflow of Covid-19 cases at the hospital—a “triage tent.”

For a big city full of poor people, LA has been luckier in the face of the coronavirus than New York. The sprawl that urban critics have been complaining about for decades—the gridlocked freeways and the endless bland suburbs, where everybody gets a little house with a little front yard—makes it easier to maintain the required social distance than in dense urban centers like Brooklyn and Queens. That’s one big reason why the death rate in New York City has been 20 times higher than in LA.

But our assumptions about LA’s lower urban density need to be qualified, says urban theorist Mike Davis (disclosure: He and I have just published a book on LA in the 1960s, Set the Night on Fire.) He points out that Maywood, a town on the Alameda corridor between downtown and the port of LA, is the ninth most densely populated city in the nation—the first eight are all suburbs of greater New York. “Nearby Cudahy and Huntington Park, as well as West Hollywood, have populations denser than San Francisco,” he points out. And within the city of LA, “Koreatown is like Brooklyn. Will their densities be reflected in a final map of positive cases?”

Whatever the reasons, hospitals in LA have not been overwhelmed by the virus. The authoritative Covid-19 tracker at the Institute for Health Metrics at the University of Washington showed no shortage of hospital beds or ICU beds for California at the peak in April, while New York State had a shortage of more than 10,000 hospital beds and 5,000 ICU beds.

And LA has some new hospitals. The navy’s hospital ship Mercy docked in LA harbor on March 27 and immediately became the biggest hospital in LA, with 1,000 beds. And billionaire Patrick Soon-Shiong, who bought the Los Angeles Times two years ago, has now bought (for $135 million) the recently closed St. Vincent’s hospital near downtown, which will become the “LA Surge Hospital,” opening April 19 with (eventually) 266 beds, but only for patients who tested positive at other regional public and private hospitals.

But the toll in LA has nevertheless been immense. Almost half of Angelenos report job loss or reduction of hours in a new poll from Center for the Study of Los Angeles at Loyola Marymount University. Heidi Tinsman, a historian at UC Irvine, reports that in her neighborhood of San Pedro (the port of LA), which is mostly working-class and very multicultural, more than half have lost their jobs, including restaurant workers, crew members in the film industry, construction workers and contractors, and everyone doing housekeeping or nannying. Longshore workers report that work for casuals has dried up, and although most regular union members still have work, their hours are reduced. Ships still come in, but like the 2008–10 crisis, the vast majority of cranes “‘have their nose in the air,’” Tinsman reports, “meaning they are not unloading or loading anything.” Among those still working are public school teachers, who “report it is impossible to teach with their own kids at home, combined with the fact that most of their students don’t have access to the Internet, despite efforts to deliver Chromebooks to the poor.”

It’s “an economic calamity for workers in the hotel industry,” Meghan Cohorst told the LA Times—she’s the spokeswoman for Unite Here, which represents workers at hotels, LAX, Disneyland, and Dodger Stadium, all of whom are facing massive unemployment. Local 11 is running a food bank for its members, which distributed food to 7,000 people on April 10.

THE POLICE AND THE JAILS

Crowed jails are a frightening breeding ground for the virus, and LA County runs the biggest jails in the country. The sheriff has reduced the number of inmates by more than 4,000, almost a quarter of the pre-Covid total—releasing those with fewer than 30 days of jail time left to serve. But unlike San Francisco, where the DA reduced the jail population—by 38 percent—because of public health concerns as well as a broader commitment to decarcertion, in LA the reduction has been largely a response to “community pressure,” says Melina Abdulla, a co-founder of Black Lives Matter-Los Angeles and a professor of Pan-African Studies at Cal State LA. The key groups have been Reform LA Jails and Justice LA, along with the ACLU of Southern California and others.

The police and sheriffs in LA have announced they are issuing citations instead of arresting people, and the LAPD has announced that it’s shifting hundreds of cops to street patrol “to help people feel secure in the city.” “Black folks are concerned about that,” Abdullah says. “It feels like a set-up for harassment, brutalization, and criminalization. Also, it’s a waste of resources that could be better used for healthy food programs, testing centers, housing, mental health, and other resources that could speak to the disparate impact of Covid-19 on black people in particular.”

LA is notorious for its huge homeless population: 60,000 people living on the streets—in tents and under bridges, with the biggest group—maybe 5,000 people—downtown on Skid Row. Mark Casanova of Homeless Health Care LA (HHCLA) says, “There is a deep sense of community among Skid Row residents and the great majority seem to be aware of Covid-19 and its implications. The majority of Skid Row community members (guesstimate of 70 percent) are wearing some form of personal protective equipment (PPE—gloves and/or face masks) and are requesting more. There is an immense overall need for additional PPE in the Skid Row area. For example, HHCLA’s ReFresh Spot received a donation of 1,000 face masks this week and was able to distribute them all to the Skid Row community in about one day.”

Mayor Eric Garcetti announced last month that he planned to convert 42 recreation centers into homeless facilities with 6,000 beds. That number was later reduced to 2,000 after they realized that beds needed to be six feet apart. The Los Angeles Times reported that “the city has received relatively little opposition to the shelter program” from NIMBY groups, with one exception: Pacific Palisades, above the beach, where there’s a lawsuit seeking to block officials from moving homeless people into the local rec center. According to the Times, “the city probably won’t even need to use that recreation center for a shelter”—which seems absurd, given the tens of thousands living on the streets.

But the new shelter program “does not appear to be having any noticeable effect” on the street population, says Mark Casanova. “We’ve heard from one outreach team that the rec center shelters don’t have adequate supplies (hygiene kits, feminine products, basic supplies). This will likely change with time, but at the moment there is a critical shortage of those type of items, including PPE. We have seen an increase in drug overdoses and increased substance use in general since Covid-19 hit. Additionally, there has been an increase in emotional/mental health crises—suicide rates among the homeless and suicide risks are higher. There is an increase in domestic violence situations as well.”

Civil rights attorney Carol Sobel raised a different objection to the new shelter program. Appearing in Federal court as the lawyer for the Orange County Catholic Worker, said she was “worried about the city packing more people into recreation centers than the CDC recommends gathering in one place.” She added that “cramming people into buses and transporting them to recreation centers could spread the virus”—a better solution, she suggested, was placing the homeless in hotels and motels, with oversight from homeless service organizations.

And then there’s the Dodgers. Cheated by the Houston Astros in the 2017 World Series, 2020 was going to be their year, especially after they signed the great Mookie Betts. The Dodgers sell more tickets than anybody in baseball. But now they (and everybody else) are refusing to refund tickets bought for unplayed games. Those games are still listed as “postponed” on the official schedule, rather than “canceled.” At a time when fans are facing unemployment and worse, that is a special outrage.

But there’s at least one piece of good news: the air. Michael Ned Holte, an art critic and Cal Arts faculty member, lives in South LA just off the freeway, which is now almost empty. As a result, he says, “the sky in Los Angeles has not been this clean or beautiful in my 25 years living in the city.”