Mr. Smith and the Quest for a Perfect Candidate 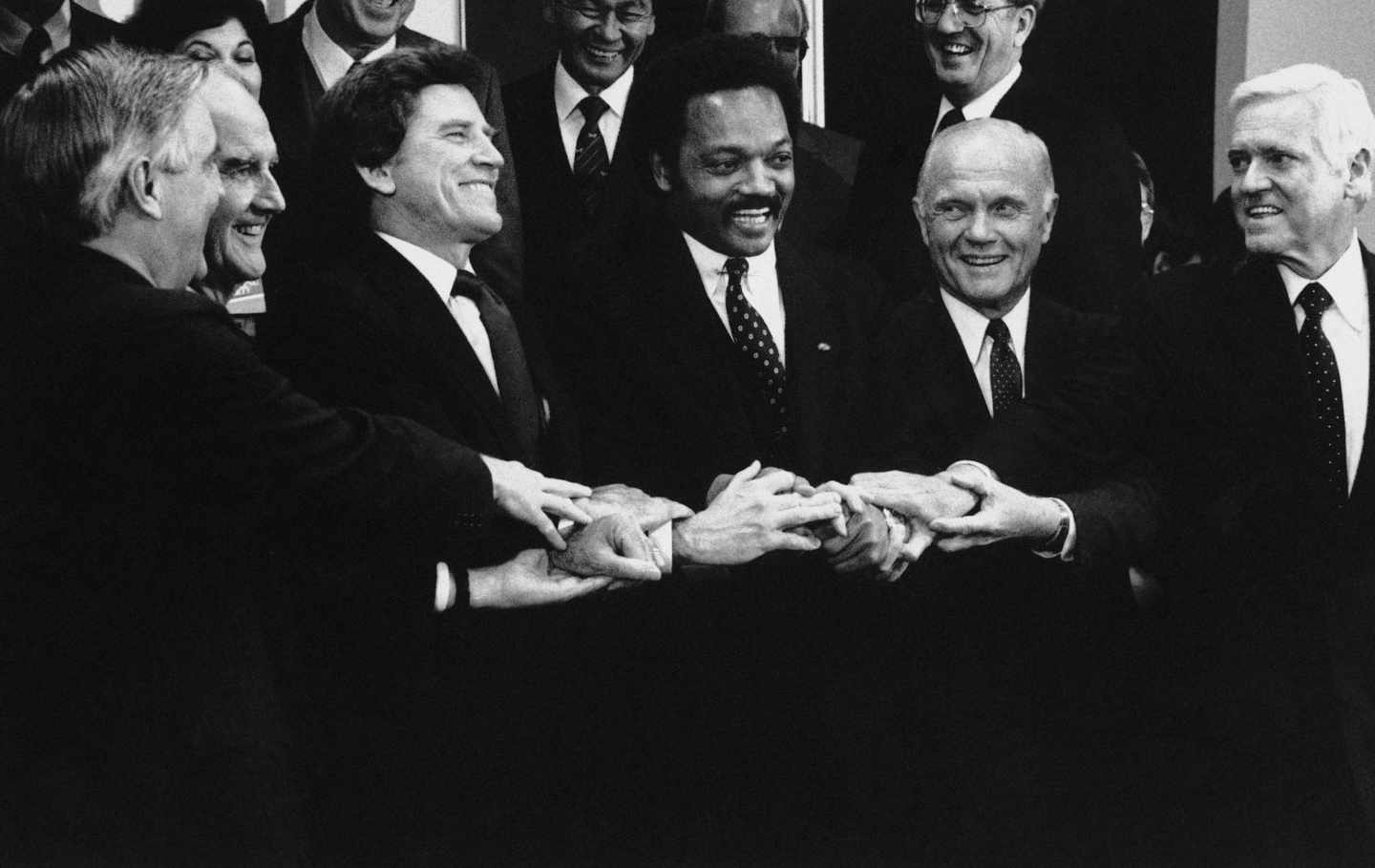 First in a series

The Democrats’ presidential front-runner is out-of-date, indebted to special interests, and too closely associated with the endless wars launched by his predecessors. Who wants a tired old former vice president anyway? What the party needs -- and what the country wants -- is not a political lifer. It’s a fresh-faced citizen politician who is independent-minded, untarnished by foreign policy blunders, and unbeholden to the special interests that dominate Washington.

This is a contemporary complaint about the state of the Democratic Party’s primary field, but it’s not new. Although today’s restive progressives discuss Joe Biden this way, the same lament was made by reform-minded Democrats in the 1984 election cycle. The Joe Biden of that campaign was Walter F. Mondale. The loudest and most influential Democrat longing for a dynamic and more independent candidate was an accomplished pollster and gifted political strategist named Patrick J. Caddell. In 1983, as he cast his net for a new kind of Democrat, Caddell worried not only that Mondale would lose the election, but that his party was losing its soul.

Pat Caddell and “Fritz” Mondale had a history, and it wasn’t a happy one. This wasn’t merely a personality clash, however. It was a collision of competing worldviews. Establishment Democrats were constantly trying to revive the old Franklin Roosevelt coalition. Among other things, this necessitated carrying some Southern states. Jimmy Carter had done it -- with Caddell as the boy wonder pollster of the campaign -- and Bill Clinton would resuscitate Democrats’ fortunes in 1992 in part by employing an updated version of the old electoral map formula.

But Caddell had done in-depth surveys that bolstered his belief that tactical politics were not enough and that the aspirations of millions of Americans were being ignored by the reigning political duopoly. In a 150-page memo, he described a stark disconnect between the voters and bosses of the Democratic Party, which “is broken into fiefdoms whose warlords are its clamoring constituencies.”

The manifesto’s implication was that instead of offering candidates who could inspire voters, the Democrats’ field was filled with aspirants who simply passed various party litmus tests. To counter the problem, Caddell conjured up a fictional candidate, “Sen. Smith,” who was in his 40s, had been the Senate for about a decade and was uncorruptible, moderately liberal, and passionate about shared sacrifice.

Smith is oriented toward the future, not the past. He isn’t afraid of bold solutions to pressing national problems. He always puts country ahead of party. The inspiration was Sen. John F. Kennedy, Caddell’s boyhood hero. The nom de plume came from “Mr. Smith Goes to Washington,” Frank Capra’s 1939 classic Hollywood morality tale starring Jimmy Stewart as Jefferson Smith.

Not surprisingly, in mock heats “Sen. Smith” siphoned off votes wholesale from Mondale and the other 1984 hopefuls, including former astronaut John Glenn, the very personification of JFK’s “New Frontier.” Caddell showed his research to a handful of incumbent Democratic senators in their early 40s, none of whom saw themselves as a viable stand-in. Then, on New Year’s Eve 1983, Caddell was invited to make a presentation at the suburban Maryland home of an old friend: Colorado Sen. Gary Hart, the Democrat who’d first brought Caddell into presidential politics on the 1972 George McGovern campaign.

It wasn’t a perfect fit: The cerebral Hart lacked the fiery passion of “Sen. Smith.” Moreover, Caddell, who had a mercurial nature and was something of a control freak, was inserted uneasily into an existing campaign structure. Yet the results were immediate. After hiring Caddell, Hart caught fire -- galvanizing younger voters and nearly wresting the 1984 nomination from Mondale. When the party establishment chose Mondale anyway, the ticket lost 49 states. Caddell’s critics note that no Democrat could have won that year, not even Jefferson Smith. This is true. For that matter, neither could Jimmy Stewart, a real-life war hero who in his day was a combination of Tom Hanks and John McCain. The reason is that Stewart’s real-life friend Ronald Reagan was running for reelection in 1984, and he was unbeatable.

But Caddell wasn’t obsessed with any single election. He was raising deeper questions that still reverberate. And since Caddell saw the electorate in generational, not geographic, terms, those he tried to get to don the Smith mantle ranged from Arkansas Sen. Dale Bumpers to Connecticut’s Chris Dodd. He had even more callow candidates in mind, too, telling me then that he was intrigued by the possibility of running the youngest presidential nominee in history against the oldest.

Caddell was also fascinated with more metaphysical political questions. He was working on Jimmy Carter’s 1980 reelection campaign when Reagan eviscerated the incumbent in their debate with a simple question: “Are you better off today than you were four years ago?” The U.S. economy was a mess, so the line was effective. But Caddell believed Reagan’s one-liner had a selfish quality to it, and that what appealed more deeply to Americans’ innate sense of community was John F. Kennedy’s challenge in his inaugural address: “Ask not what your country can do for you…”

Hart and his advisers, including Caddell, knew what a tough customer Reagan would be, but if Hart could get the nomination their plan was to run credibly against him, and then complete the deal in 1988. As it happened, Hart’s second campaign was derailed by failings that had nothing to do with Caddell’s theories -- it was private behavior that seems mild compared with the subsequent sins of Bill Clinton and Donald Trump. Still, Caddell never gave up trying to warn the political establishment about the risks of widespread voter alienation.

Although he left campaigning, Caddell never went far away. He advised on the Hollywood hit “The West Wing,” maintained his polling database, issued periodic warnings to each political party, and 12 days before Election Day 2016 publicly tried to alert Democrats that undecided voters were moving toward Trump. The prediction was made on Fox News, where he’d become a frequent guest. By the end of Barack Obama’s first term in the White House, Caddell often reprised a favorite line of Jimmy Carter’s old nemesis. “I didn’t leave the Democratic Party,” said Reagan (and Caddell). “The Democratic Party left me.”

He didn’t migrate as far as Reagan: When he died at age 68 a year ago, Caddell was an independent, not a Republican. His infamous temper had mellowed and he felt most comfortable giving advice to candidates not aligned with either major party. Kansas independent Greg Orman remembered him as a mentoring figure who forged an immediate bond with his 2-year-old daughter.

For the last six years of his life, Caddell regularly updated his old model in what he renamed the “We Need Smith” project. This hypothetical candidate, never identified by age, race, or party affiliation, had a favorable to unfavorable ratio of 7 to 1 -- unheard-of numbers in today’s polarized environment. Lee Hanley, a conservative donor who underwrote Caddell’s research, warned the year Donald Trump mounted his presidential campaign that “everyone else in politics is ignoring the volcano rumbling beneath them.” But Caddell’s research lives on. Orman has taken on the responsibility of sponsoring it and the baton has been passed to John Della Volpe, polling director for RealClear Opinion Research. The results of his surveys, which will be tabulated and rolled out in the days ahead, show that the troubling trends Caddell first identified more than 35 years ago remain. In some ways they have worsened. Voters have a jaundiced view not just of politics, but about their fellow Americans who do not share their political affiliation.

Not surprisingly, 83% percent of respondents now give the hypothetical Smith a favorable rating. To be sure, there are limitations to these findings, given the way he is described in the survey. (“Candidate Smith…will take on the political elites and special interests and put the American people in charge again.”)

He’s always polled strong, this guy, and it’s a tantalizing historical footnote to recall that among the fresh-faced Democrats whom Pat Caddell considered to be “Sen. Smith” material in the run-up to the 1984 presidential campaign was 41-year-old Joseph Biden Jr. of Delaware. Biden opted out at that time. He wanted no part of Reagan and didn’t want to sacrifice his Senate seat, which was up for reelection that year – although he was intrigued enough to sign on with Caddell four years later.

He still is, too, and his rising popularity indicates deep unease with politics-as-usual. The numbers also suggest that Americans would be receptive to an independent presidential candidacy, an agenda that Greg Orman openly concedes is one of his goals. That’s where Caddell was by the end of his life, too, notwithstanding the tremendous hurdles the two major parties have erected to just such a candidate.

How high are they? Here’s one indication: Michael Bloomberg, the most prominent independent in the country, re-registered as a Democrat and seems intent on spending $1 billion of his own money to run in the Democratic primaries rather than as an independent. Four years ago, another non-ideological New York billionaire made the same calculation, and ran as a Republican. He is now in the White House.

So, yes, skepticism is warranted that an independent can buck the system. John Della Volpe will provide more caveats and context in tomorrow’s second installment in this series.

But even if electing a truly independent president is unlikely, it was Jimmy Stewart, as Jefferson Smith, who proclaimed on the floor of the United States Senate that “lost causes” are the ones worth fighting for, adding, “And I’m gonna stay right here and fight for this lost cause!”

Carl M. Cannon is the Washington bureau chief for RealClearPolitics. Reach him on Twitter @CarlCannon.