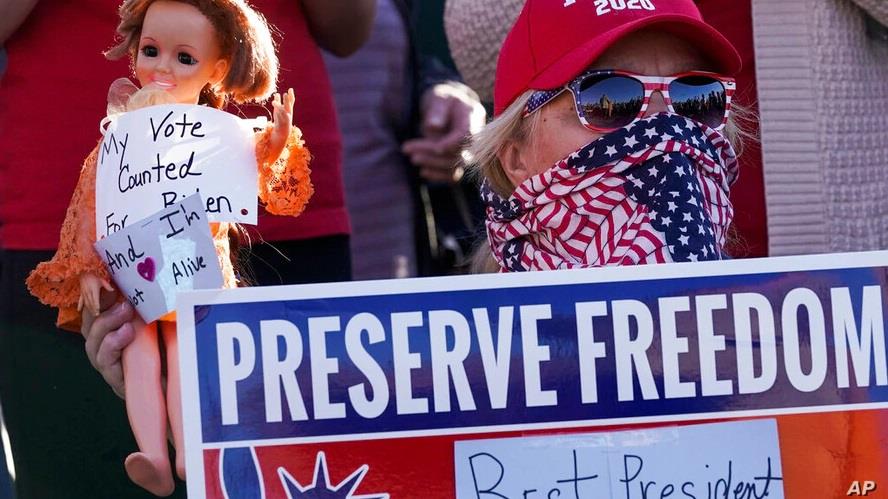 FILE - A supporter of President Donald Trump is seen during a rally in Milwaukee after it was announced that the president had been defeated by Democrat Joe Biden, Nov. 7, 2020.


A new poll shows that about half of U.S. Republican voters believe the claims of President Donald Trump that he “rightfully won” his re-election contest two weeks ago over his Democratic challenger, President-elect Joe Biden.

Trump has made baseless, near-daily claims that the vote and vote counting was rigged against him, and he has refused to concede the outcome to Biden.

A new Reuters/Ipsos opinion poll of more than 1,300 people released Wednesday showed that 73% agreed that Biden won, and 5% thought Trump had.

But Republicans were skeptical of the outcome when specifically asked whether Biden had “rightfully won.”

Fifty-two percent of Republicans said Trump had “rightfully won,” while only 29% said that Biden had done so.

Asked why, 68% of Republicans expressed concern that the election was “rigged,” as Trump has contended, while only 16% of Democrats said that was the case and a third of independents.

But all major news media in the U.S. have declared that Biden has amassed well more the 270-vote majority in the 538-member Electoral College that is determinative in U.S. presidential elections. Biden also leads by millions in the national popular vote, as did Democrat Hillary Clinton in 2016 while losing to Trump in the Electoral College.

Since the election, Trump has largely stayed out of public view, but has complained often on Twitter that he was cheated out of a second term by voting and vote counting irregularities. However, Trump has lost numerous court challenges and has been unable to produce evidence of widespread vote fraud.

Altogether, the poll showed 55% of adults in the United States believed the election was “legitimate and accurate,” a figure down 7 percentage points from a similar poll that ran shortly after the 2016 election.

Twenty-eight percent of those polled in recent days said they thought the election was “the result of illegal voting or election rigging,” a figure up 12 points from four years ago.