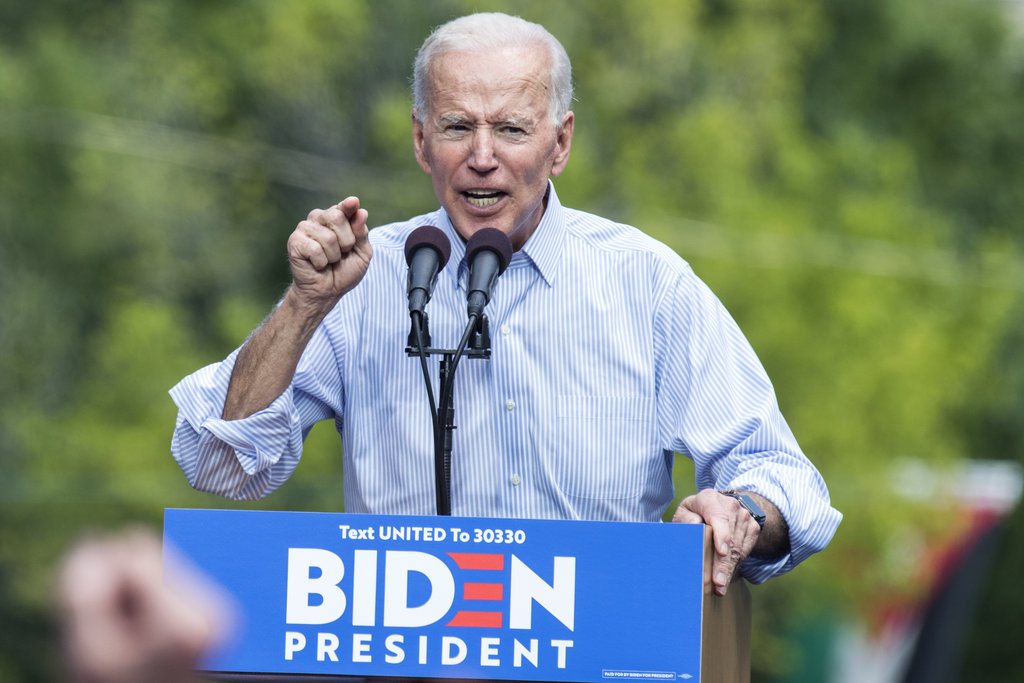 Democratic presidential hopeful Joe Biden said he would build on the 2010 health insurance overhaul enacted
by President Barack Obama instead of creating a new system, a clear line of demarcation between him
and several other Democrats running for the nomination. (Tom Williams/CQ Roll Call file photo)

Declaring that “starting over makes no sense,” former Vice President Joe Biden said Monday that he would build on Democrats’ signature 2010 health insurance overhaul and that plans offered by rivals for the presidential nomination would reverse gains made under President Barack Obama.

Biden released his plan ahead of a speech that Sen. Bernie Sanders of Vermont is to give Wednesday to promote a government-run “Medicare for All” system. It is the first of several forums hosted by AARP in Iowa, where 2020 hopefuls will talk about how to lower prescription drug prices.

Biden said his plan would extend insurance to an estimated 97 percent of Americans, in part by providing a voluntary public option based on Medicare’s framework. That idea was considered but did not make it into the 2010 law, which set up government-run exchanges selling private insurance plans, often with federal subsidies.

“I understand the appeal of Medicare for All, but folks supporting it should be clear that it means getting rid of Obamacare, and I’m not for that,” Biden said. “Starting over makes no sense to me at all.”

Sanders, a leading voice for a single-payer plan, shot back at Biden on Twitter, saying he had voted to pass the 2010 health care law and fought Republicans seeking to repeal it. Sanders said he would “not be deterred from ending the corporate greed that creates dysfunction in our health care system.”

Democrats view health care as one of their biggest political advantages against Republicans in the 2020 election, but there are clear divisions in the crowded field of candidates over whether to move to a single-payer system and potentially eliminate private insurance.

“The road to 270 electoral votes runs through purple states like Colorado,” Sen. Michael Bennet, another 2020 hopeful, said on Twitter of his home state. “If we nominate a candidate whose Medicare for All kicks people off their employer insurance, we risk losing in Colorado — and the White House.”

Disagreement was evident on the campaign trail in New Hampshire over the July 4 congressional recess, though it was less clear the extent to which it was reaching voters who will cast some of the first ballots in the nomination fight.

New York Sen. Kirsten Gillibrand said a bill she is co-sponsoring calls for a four-year transition to a single-payer system that would offer time for most people to learn about and shift to a government plan. She argued people would want to make the shift because the government plan will be better.

“If you have access to better health care that’s less expensive, you’re going to choose that,” she told reporters after a meet-and-greet with potential voters at a coffee shop in Lancaster, New Hampshire. “Because you want better coverage, you don’t want to be denied days in the hospital like insurers do, or denied medicine [by] your insurance.”

On the other hand, former Maryland Rep. John Delaney said he thought the push toward government-provided coverage was more about eliminating insurance companies rather than improving the health care system.

“It’s about anti-business,” Delaney said in Atkinson, New Hampshire. “I don’t love private insurance companies more than anyone else. But they’re an important part of our health care system and we shouldn’t throw it out.”

Republicans have seized on plans to end private insurance coverage, accusing supporters of being socialists and warning it would jeopardize the coverage elderly Medicare recipients get now. They also say it would cost the government trillions of dollars, ignoring the costs paid by employers and workers for private insurance now.

Donna Williams, who attended an event for Gillibrand in Bethlehem, New Hampshire, and lives a short drive away in Bradford, Vermont, said she learned the most about the health care plans that candidates support during the first presidential debates.

“I don’t know where I land. I think Medicare for All, maybe,” she said. “What I heard was that’s an end point we could get to at some point and we move away from the insurance companies.”

While Williams asked Gillibrand to explain her health care positions, neither candidate faced sharply pointed questions from attendees at public events about the role of private insurance.

Most potential voters interviewed over the congressional recess said they were open to expanding Medicare coverage. But few seemed to support the plan as laid out in current legislative language. Many suggested changes to either allow people over 50 to buy into the program, rather than compel Americans to enroll, or raise reimbursement rates under the program, something both Gillibrand and Delaney backed.

Karen Steele, a member of the Atkinson Town Democratic Committee that co-hosted the Delaney event, said the debate over private insurance coverage seemed odd to her.

“As long as every person has the right to health care, I don’t care if the super-rich people have their own private insurance, if that’s what that is,” she said.

Only four of the 20 candidates who participated in the June presidential debates raised their hands to show they wanted to eliminate private health insurance.

California Sen. Kamala Harris was one of them, but later said she thought she was asked if she personally would enroll in a single-payer plan. She has twice backtracked on support for eliminating private coverage, noting that supplemental insurance could still exist under the law.

Rules for Democrats’ third debate in September will not allow questions requesting a show of hands, but voters are still likely to want clarity on candidates’ positions.

Progressives are adamant that government-run coverage is the way forward, but support for it can quickly crater, said Dan Mendelson, a former Clinton White House staffer and founder of the consulting firm Avalere Health.

“It is on the fringes, and the longer it sits around and the others have to grapple with the reality of it, they’re not supportive,” he said.