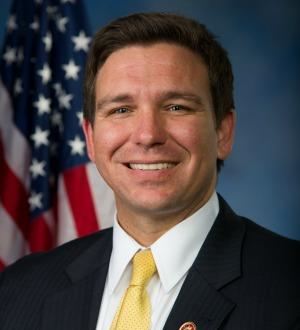 TALLAHASSEE (CBSMiami/AP) — Florida Gov. Ron DeSantis said he wants to look into the idea of holding a separate election for proposed constitutional amendments. DeSantis said this would be a way to declutter the ballot and allow voters to focus on ballot proposals. “If we’re going to do these amendments, maybe have those be stand-alone elections,” DeSantis said during a Jacksonville event. “Maybe it would cost a little more money for the state, but at least people would know when they’re going, that’s the reason I’m going.” DeSantis was responding to a reporter’s question about a bill the governor signed last week that places hurdles on petition drives seeking to change the constitution. He defended the new law, which requires paid petition gatherers to register with the secretary of state, outlaws paying gatherers based on the number of signatures they collect and imposes fines if petitions aren’t turned in within 30 days. DeSantis also said he wants to do more to change the process of amending the constitution. One reason to hold a separate election for constitutional amendments would be to shorten general election ballots, he said. “You know we’re going to vote for the presidential, you’re going to vote for Congress, state Senate, state House, all these other offices. Then you’ve got judges. And how many amendments did we have last time?” DeSantis said. Florida had 12 amendments on the ballot last year, 11 of which passed. They included seven questions placed on the ballot by the Constitution Revision Commission, which meets every 20 years to suggest changes to the constitution. A bill died during this year’s legislative session that would have asked voters to abolish the commission, an idea DeSantis wants to continue pursuing. Part of his criticism is that the commission bundled different topics. Five of the commission’s proposals contained more than one subject, such as one that banned oil drilling in state waters and added vaping to the state’s indoor smoking ban. “To put all those amendments on when you have two or three different subjects in one amendment, I thought it was a joke. And voters are fatigued with this. The ballots are too long,” DeSantis said. “I’ve had voters who are way smarter than me say they didn’t understand some of these amendments.”   Source: CBS Miami

CHRIS URSO | Times Florida Governor elect Ron DeSantis along with his wife Casey wave to the crowd Tuesday, Nov. 6, 2018 in Orlando. DeSantis defeated Democratic candidate Andrew Gillum. Nine days after Election Day, and one machine recount later, it is all but official: Ron DeSantis is Florida's next governor. The results of the statewide machine recount which rolled by the Thursday 3 p.m. deadline, solidified what most already knew, as DeSantis has already made himself busy with transitioning to power and creating a new government. In the governor's race, it was an anticlimactic finish to the dramatic machine recount — plagued with technical issues and an avalanche of lawsuits — with almost no change in the margin between DeSantis and his Democratic opponent, Andrew Gillum, since this weekend. Still, about 0.41 percentage points separate the two candidates, or just under 34,000 votes. Just after the results were released, DeSantis sent a statement to reporters declaring victory — once again. "I remain humbled by your support and the great honor the people of Florida have shown me as I prepare to serve as your next governor," his statement read, striking a more conciliatory tone than the confrontational-approach he used in the campaign. He said the campaign must now end so it can "give way to governing and bringing people together to secure Florida's future. With the campaign now over, that's where all of my focus will be. "And, to this end, I invite Mayor Gillum to join me in the days ahead in a conversation about the future of our great state." Unlike the races for U.S. Senate and commissioner of agriculture, DeSantis' margin of victory is not slim enough to proceed to a manual recount, which requires the race to be within one-fourth of a percentage point. That means Thursday is the end of the road, and barring a lawsuit that demands a change in procedure, the governor's race's official results will likely be submitted by the counties on Sunday and will likely be officially certified on Tuesday, Nov. 20. Despite the fact that DeSantis still had about 34,000 more votes than Gillum, over the weekend, the fact that the race's margin slimmed to less than half a percentage point after Election Night triggered an automatic machine recount and left a haze of uncertainty over the results. Those question marks have fueled some last-ditch hope in Gillum's supporters who've been spotted sparring with pro-DeSantis protesters – including U.S. Rep. Matt Gaetz – outside the Broward Supervisor of Elections Office, and who've given Gillum hearty receptions at several post-election events. At these appearances, Gillum has continued to call for every vote to be counted, invoking a chance he could still be victorious while also preparing his supporters to stay engaged if he loses. "I wanted so bad, and still want so bad, for us to be able to make a combined impact on this state and I'm trusting that we're going to have that opportunity," Gillum told a church filled with supporters in Orlando on Tuesday. "Once we get beyond this election, whatever the outcome may be, we will have to commit ourselves to an improved and a better democracy." Once the results of the machine recount were submitted Thursday afternoon, Gillum issued an ambiguous statement saying, "It is not over until every legally casted vote is counted." Meanwhile, DeSantis has posted several quick videos that have depicted him as a governor-elect, as he spoke in front of a velvet backdrop flanked by flags or in the state Capitol building, giving broad updates on the transition. "We're hard at work and if you want to work for the administration, if you have something to offer, send us your resume," he said at the end of his most recent video, posted Monday. That day, the team opened their transition office in Tallahassee and began the long work of recruiting new hires for both the governor's office and for the state agencies. Also on Monday, DeSantis' team announced its first round of hires to fill out the transition's staff since its core leaders were announced. One of the most notable is James Blair, the transition's director of policy, who helped lead House Speaker Richard Corcoran's pseudo-campaign for governor that never materialized. Taylor Budowich, who ran communications for that campaign as well, also has an official DeSantis transition email account, according to records obtained by the Times/Herald. After first endorsing DeSantis' Republican opponent, Adam Putnam, in the primary, Corcoran joined DeSantis' ranks in the general election and is now helping lead the transition. His official role, in addition to his former campaign workers joining the efforts, ensures the fiery, outgoing speaker with a reputation for strong-arming policies through the Legislature will play a major role in DeSantis' setup and perhaps in the administration. Several other recent hires are holdovers from the campaign, such as Dave Vasquez, the press secretary, and Claire Whitehead, who traveled with Casey DeSantis on the campaign trail and has now been hired as the incoming first lady's assistant. Meanwhile, other additions formerly worked for other DeSantis political allies, such as a former advisor to Gov. Jeb Bush, Chris Clark; staff assistant of Sen. Marco Rubio, Amanda Emmons; and a lawyer who used to work for Gov. Rick Scott, Ben Gibson.

As a Floridian who cares about the future of our state, I want Florida to continue Governor Scott’s success on economic growth and on safety. Over the last eight years, I have personally observed Governor Rick Scott’s outstanding achievements in creating economic prosperity for Floridians. Very important to Asian American communities, we have had very safe neighborhoods. Unlike a few other states where Asian American small businesses suffered badly from robberies and other crimes, Florida provides a safe environment for our small businesses. Florida is on the right path. We do not want to change course by Mr. Andrew Gillum who is not tough on crime and not pro-business. Rep. Ron DeSantis is the only candidate who can continue economic prosperity and safety in Floridians.     As the first generation immigrants from China, I have first-hand knowledge about how socialism failed miserably to Chinese people. To avoid such disasters from happening in Florida, we cannot vote for Mr. Gillum. His socialist ideology is likely to stifle individual creativities of Floridians and make Florida another Venezuela. We cannot let it happen!    As an Asian American, I care dearly about our children’s education. We cannot vote for Mr. Gillum because he will roll back student performance tests which are essential to our children’s educational quality. Equally important, we need a governor who will continue support of equal education rights in college admissions in Florida, just like what Governor Jeb Bush did. Only Rep. DeSantis, a true conservative, can safeguard that.   As a Florida resident and a community leader who has been fighting for Asian American children’s equal education rights for years, I hereby call upon all Asian Americans in Florida vote for Ron DeSantis for Florida Governor. He will continue Governor Scott’s success in Florida and support Asian American children’s equal education rights!   Sincerely, Yukong Zhao   Note: Mr. Yukong Zhao serves as the President of Asian American Coalition for Education, the proven leader in fighting for Asian-American children’s equal education rights. 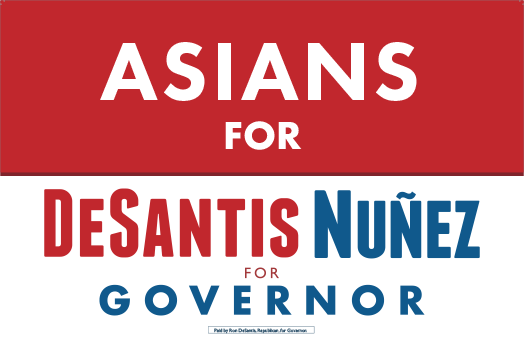