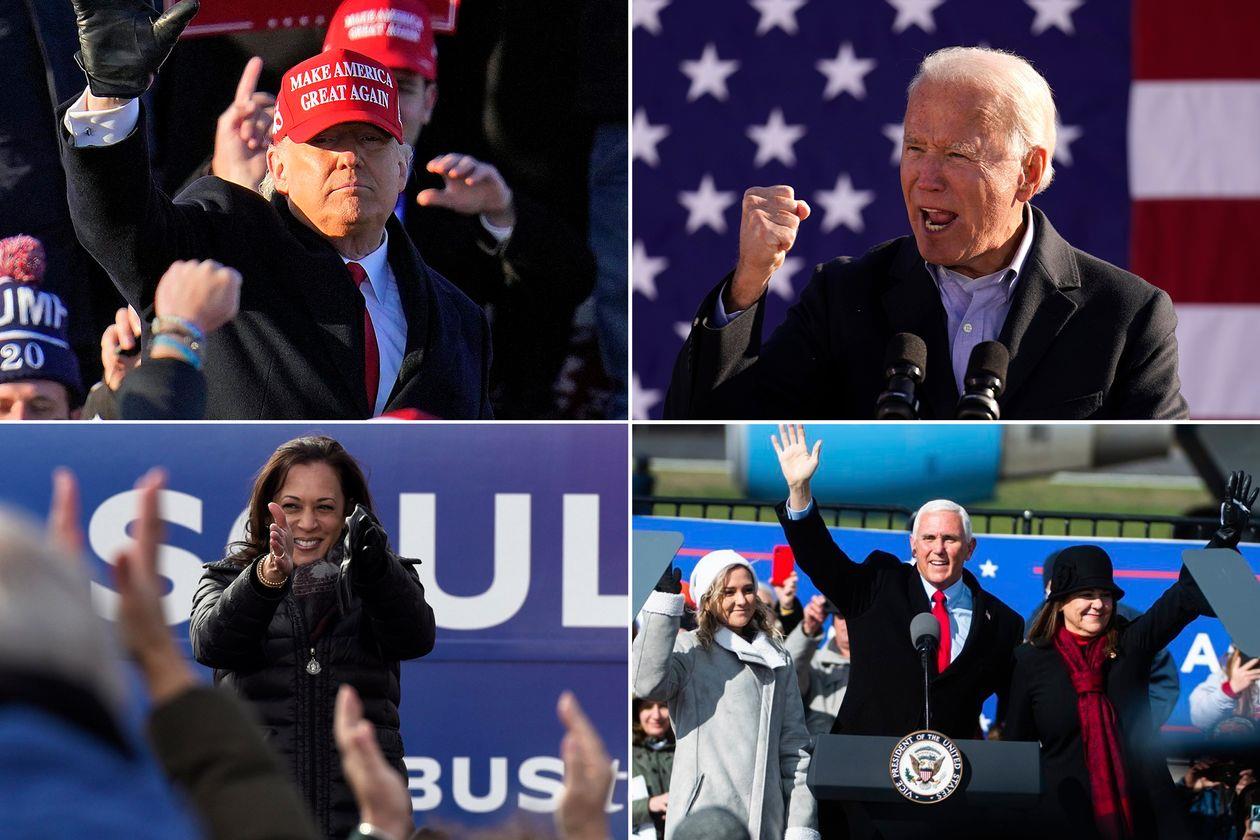 In Pennsylvania on Monday, President Trump spoke at a rally at the Wilkes-Barre/Scranton airport; Joe Biden attended a rally in Monaca; Vice President Mike Pence, along with his wife, Karen, and daughter Charlotte were in Latrobe; and vice-presidential candidate Sen. Kamala Harris was in Pittston.
PHOTO: CLOCKWISE FROM TOP LEFT: GENE J. PUSKAR/AP; ANDREW HARNIK/AP; SHANE DUNLAP/PITTSBURGH TRIBUNE-REVIEW/AP; MICHAEL PEREZ/AP


WASHINGTON—President Trump and Democratic nominee Joe Biden offered dueling visions for the future, closing out the 2020 presidential campaign against a backdrop of concerns over the vote-counting process and the prospect of legal challenges ahead.

A day out from Election Day, Mr. Biden kept his focus on Ohio and Pennsylvania, while Mr. Trump hoped to boost his support with a dash across North Carolina, Pennsylvania, Wisconsin and Michigan. Nearly 100 million ballots had already been cast, through in-person early voting or mail-in ballots, and election officials in many states were steeling themselves for a drawn-out vote-counting process due to the massive increase in early votes.

A Wall Street Journal/NBC News poll conducted Sunday found that support for the two candidates in a group of 12 battleground states had remained unchanged in recent days, with Mr. Biden leading Mr. Trump, 51% to 46%.

Democrats and Republicans were bracing for potential legal clashes over the results, as Mr. Trump spent the closing days of the campaign questioning extended vote counting and threatening legal action in key states. The Biden campaign has rejected his comments, stressing votes must be counted.

“One more day!” Mr. Biden declared at a drive-in rally in Cleveland, where he sought to help Ohio Democrats recapture a state that shifted decisively behind Mr. Trump and Republicans in 2016.

Mr. Trump again pitched himself as a political outsider, telling a cheering crowd in Fayetteville, N.C.: “Do you want to be represented by a career politician who hates you or by an outsider who will defend you like you have never been defended before?”

Later, in Avoca, Pa., he said to a pack of supporters that he wasn’t standing in front of the “crowds of a second-place finisher.”

The final blast of campaign activity concluded an extraordinary political year, marked by the coronavirus outbreak, economic disarray and racial upheaval. Despite the tumult, Mr. Biden has maintained a lead in most national polls, as much of the public focus remained on Mr. Trump and his handling of the pandemic.

Congressional races were also in the final stretch Monday, with Democrats hoping to expand their House majority and Republicans fighting to keep control of the Senate.

The Biden campaign has warned against any attempt by the president to prematurely declare victory. Campaign manager Jen O’Malley Dillon said that “under no scenario will Donald Trump be declared a victor on election night.”

Both parties are fighting in courts over election rules that could determine whether thousands of ballots, if not more, are counted as valid or tossed out. Mr. Trump and his allies have raised concerns about counting votes beyond Election Day, even though election officials have said the counts have to go past Tuesday because of the volume of mail-in ballots that take extra time to tabulate.

On Twitter on Monday, Mr. Trump criticized the Supreme Court for declining to disturb extended ballot deadlines in Pennsylvania, saying it “will allow rampant and unchecked cheating” and will “induce violence in the streets,” adding: “Something must be done.”
Mr. Trump has frequently claimed that increased mail-in voting would lead to widespread fraud in the election. Researchers have found instances of absentee voter fraud, but studies show it isn’t widespread and election officials say they employ safeguards. Twitter flagged the tweet, saying that “content shared in this Tweet is disputed and might be misleading.”


While news organizations may call a race if a candidate is clearly ahead, results are considered unofficial until all votes are counted and certified, a process that often takes weeks. Some key states haven’t yet begun tallying early votes and have said they would report results Wednesday and beyond. Pennsylvania’s chief election official has said the state may need until Friday to count most of the state’s ballots.

The Texas Supreme Court on Sunday rejected a challenge by state Republicans to drive-through voting in Democratic-leaning Harris County, the state’s most populous county. A federal judge also rejected the effort Monday, which had created uncertainty for more than 120,000 votes that already have been cast.

The WSJ/NBC News poll from Sunday showed that supporters of Mr. Biden are more likely to say they are voting early or already have. Meanwhile, Mr. Trump’s backers are more likely to vote in person on Election Day. That means it is likely that the first batch of results from Election Day in some states will look better for Mr. Trump than after early and mail-in ballots are counted.

The Justice Department said Monday it is sending personnel to monitor voting-rights issues in 44 jurisdictions across 18 states, a routine measure that has taken on increased significance, given heightened concerns this year about voter intimidation and suppression.

The candidates’ final campaign schedules reflected their strategies to reach 270 Electoral College votes. Mr. Trump is looking to boost turnout with the white working-class voters that delivered the White House to him in 2016 and is trying to hit as many states as possible. Mr. Biden is seeking to generate enthusiasm among minority voters in cities and is focused more intently on a few key battlegrounds.

Polling in battleground states suggests that Mr. Biden has more paths to victory than Mr. Trump, who needs to keep much of his 2016 territory to win. Still, while Mr. Biden has an edge in some important states, many polls show narrow leads there and Mr. Trump within striking distance. 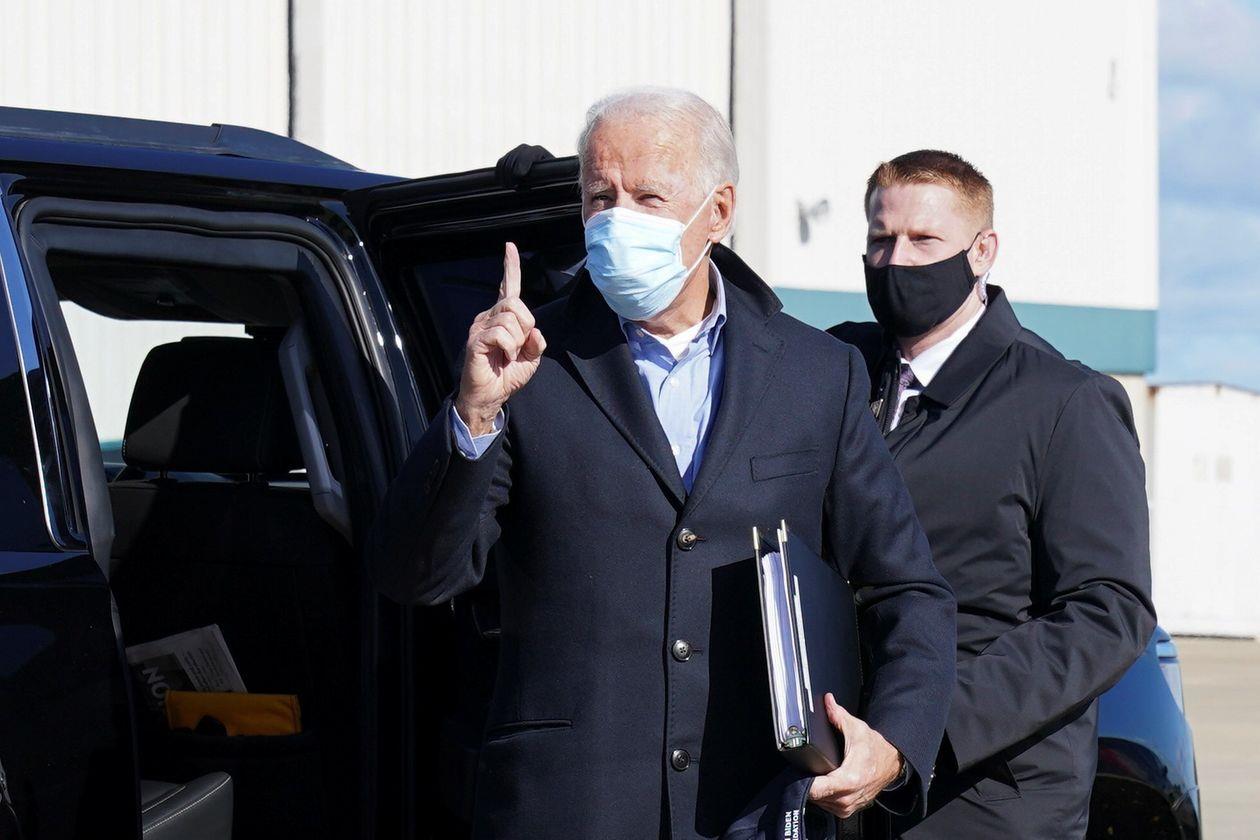 Pennsylvania, one of three Great Lakes states that Mr. Trump flipped to red from blue in 2016, is the primary focus for Mr. Biden in the closing hours. Four years ago, Mr. Trump won the state and its 20 Electoral College votes by just over 44,000 ballots out of 6.1 million cast. This year, Mr. Biden has made a play for the working-class voters by stressing his Scranton, Pa., roots and modest upbringing.

In a signal of how critical the state is to Mr. Biden’s chances, the former vice president and his running mate, California Sen. Kamala Harris, along with their spouses, were set to be in Pennsylvania on Monday for events. They were to be joined by Lady Gaga and John Legend in Pittsburgh and Philadelphia, respectively.

Mr. Biden’s campaign also announced that he would make stops in Scranton and Philadelphia on Tuesday ahead of his Election night event in his hometown of Wilmington, Del. Ms. Harris was campaigning Tuesday in Detroit before traveling to Delaware.

White House and campaign officials had discussed holding an election night event at the president’s Washington, D.C., hotel. But coronavirus-related restrictions on large gatherings in the city complicated that event. Instead, the president may address supporters from the White House’s East Room, according to a person familiar with the matter.

The White House referred a request for comment to the Trump campaign, which didn’t immediately respond.

The candidates continued to clash on how to deal with the pandemic that has upended the campaign and daily life as much of the country is seeing a surge in coronavirus cases, with more than 230,000 dead and the nation surpassing nine million confirmed infections.