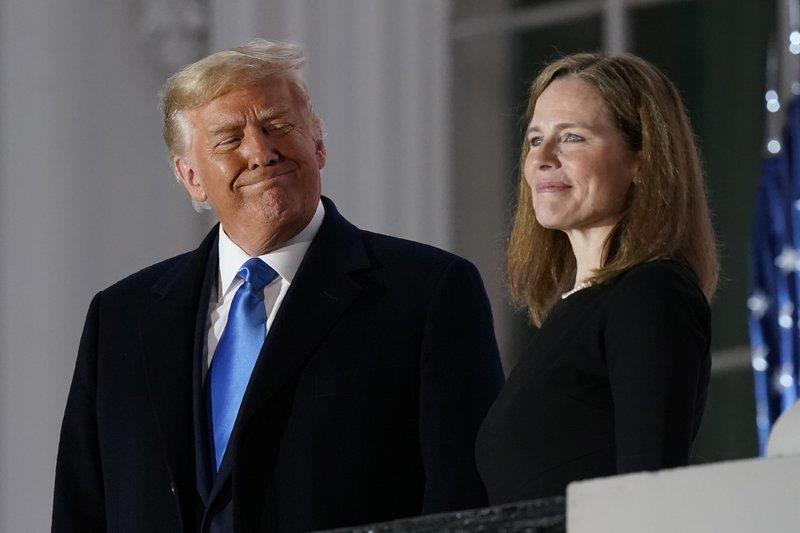 FILE - In this Monday, Oct. 26, 2020 file photo, President Donald Trump and Amy Coney Barrett stand on the Blue Room Balcony after Supreme Court Justice Clarence Thomas administered the Constitutional Oath to her on the South Lawn of the White House White House in Washington. President Donald Trump’s deep imprint on the federal courts is a rare point of agreement about the president across the political spectrum. With a major assist from Senate Majority Leader Mitch McConnell, Trump and his White House staff relentlessly, almost robotically, filled nearly every opening in the federal judiciary, undeterred by Democratic criticism. (AP Photo/Patrick Semansky, File)


WASHINGTON (AP) — On this, even President Donald Trump’s most fevered critics agree: He has left a deep imprint on the federal courts that will outlast his one term in office for decades to come.

He used the promise of conservative judicial appointments to win over Republican skeptics as a candidate. Then as president, he relied on outside conservative legal organizations and Senate Majority Leader Mitch McConnell to employ an assembly line-like precision to install more than 230 judges on the federal bench, including the three newest justices of the Supreme Court. Trump never tired of boasting about it.

Indeed, undeterred by Democratic criticism, the Senate was still confirming judges more than a month after Trump lost his reelection bid to Joe Biden.

“Trump has basically done more than any president has done in a single term since (President Jimmy) Carter to put his stamp on the judiciary,” said Jonathan Adler, a law professor at Case Western Reserve University School of Law in Cleveland. Congress created about 150 new judgeships during Carter’s presidency, he said.

The impact will be enduring. Among the Trump-appointed judges, who hold lifetime positions, several are still in their 30s. The three Supreme Court picks could still be on the court at the 21st century’s midpoint, 30 years from now.

Beyond the Supreme Court, 30% of the judges on the nation’s court of appeals, where all but a handful of cases reach their end, were appointed by Trump.

But numbers don’t tell the entire story. The real measure of what Trump has been able to do will be revealed in countless court decisions in the years to come on abortion, guns, religious rights and a host of other culture wars issues.

When it came to the president’s own legal challenges of the election results, however, judges who have him to thank for their position rebuffed his claims. But in many other important ways, his success with judicial appointments already is paying dividends for conservatives.

When the Supreme Court blocked New York from enforcing certain limits on attendance at churches and synagogues in areas designated as hard hit by COVID-19, Justice Amy Coney Barrett, the newest member of the court, cast the decisive fifth vote. Previously, the court had allowed restrictions on religious services over the dissent of four justices, including the other two Trump nominees, Neil Gorsuch and Brett Kavanaugh.

Five Trump appointees were in the majority of the 6-4 decision by the full 11th U.S. Circuit Court of Appeals in September that made it harder for felons in Florida to regain the right to vote. The Atlanta-based court had a majority of Democratic-appointed judges when Trump took office.

Last month, Judges Britt Grant and Barbara Lagoa, both named by Trump, formed the majority on a three-judge 11th circuit panel that struck down local Florida bans on therapy that seeks to change the sexual orientation of LGBTQ minors. Other appeals courts around the country have upheld the conversion therapy bans.

“Trump has appointed judges who exhibit a distinct decision-making pattern that is, on the whole, significantly more conservative than previous presidents,” the political scientists concluded in a working paper in October.

The one constant of the past four years — through impeachment, the coronavirus pandemic and Trump’s election loss — has been his nomination of and Senate confirmation of judges.

The president has had several partners in the judicial effort, but none more important than McConnell, who takes particular pride in reshaping the Supreme Court.

“I think it’s far and away the most consequential thing I’ve ever been involved in,” the 78-year-old McConnell said in an interview. “And it’s the most long-lasting accomplishment of the current administration, by far.’’

They might not have called it a partnership at the time, but their mutually reinforcing work began even before Trump’s election in 2016.

Trump used the issue of the federal judiciary to win trust with voters who might have questions about the conservative credentials of a billionaire real estate developer who had once supported abortion rights and did not have a track record in politics.

He put in writing a list of potential nominees, provided by the conservative Federalist Society and Heritage Foundation, he would select from in filling a Supreme Court vacancy.

Kellyanne Conway, who served as his campaign manager in 2016, said it was a move that people who had been in office for years and wanted to ascend to the presidency “didn’t have the courage to do, which is name names.”

As it happens, there was a high court opening at the time, following the death of Justice Antonin Scalia in February.

Enter McConnell. The Republican blocked President Barack Obama’s nomination of Merrick Garland, refusing so much as a hearing for the respected appeals court judge whom Republicans had previously identified as a high court nominee they could support.

It was a gamble at a time when Trump’s electoral prospects seemed dim, but it paid off with his stunning victory over Hillary Clinton.

And the high court seat wasn’t the only one waiting to be filled when Trump took office in January 2017. Altogether, 104 judgeships were open after Republicans used their Senate majority to grind the nomination process to a near halt in Obama’s final two years in office. Only 28.6% of his nominees were confirmed in that stretch.

The pace quickened almost immediately. Republicans moved with an urgency on confirmations that hasn’t let up. In Trump’s first two years, they pushed through 30 appellate court judges and 53 district court nominees. It was the highest number of appellate court confirmations in a two-year period since Ronald Reagan and nearly double the number that Obama secured in his first two years.

McConnell and top Republicans on the Senate Judiciary Committee eliminated rules that had allowed the opposition party to delay confirmations, most notably requiring just a simple majority, instead of 60 votes, to move Supreme Court nominees. Democrats, bitter over the stalled Garland nomination, otherwise would have blocked Gorsuch’s confirmation in April 2017.

Sen. Sheldon Whitehouse of Rhode Island, a Democrat on the Senate Judiciary Committee and a sharp Trump critic, said Trump’s judicial legacy “is a lot less about what he’s done than what he’s allowed others to do in his name.”

At the same time, the Federalist Society and other conservative groups, including the Judicial Crisis Network and Americans for Prosperity, have taken millions of dollars in anonymous donations and waged public and behind-the-scenes campaigns for right-wing judges, Whitehouse said.

Trump “opened the channel for special-interest interference in judicial selection,” Whitehouse said. “That, I think, is very novel and obviously lends itself to corruption.” He said: “Right wing forces have for decades sought the kind of influence in judicial nominations that the Trump administration outright gave them.”

On the campaign trail and at White House events, Trump would often cite his record on judicial appointments as an example of accomplishment, while ignoring the obstructions that occurred during the Obama years.

“You know, when I got in, we had over 100 federal judges that weren’t appointed,” he said. “Now, I don’t know why Obama left that. It was like a big, beautiful present to all of us. Why the hell did he leave that? Maybe he got complacent.” Trump omitted the essential fact that McConnell had blocked Obama’s nominees.

The high court vacancy at the start of Trump’s term was, in essence, a gift from McConnell. Justice Anthony Kennedy’s decision to retire in 2018 allowed Trump to replace the court’s swing justice with the more conservative Kavanaugh, who survived his own bruising confirmation hearings that included allegations he sexually assaulted a woman when they were both in high school decades ago. Kavanaugh denied the claims.

Less than two months before the 2020 election, Trump was handed another opening with the death of Justice Ruth Bader Ginsburg. Trump and Senate Republicans didn’t hesitate. He nominated Barrett even before Ginsburg was buried at Arlington National Cemetery and McConnell ensured the confirmation was done before the election.

The Senate has continued confirming Trump nominees even after his defeat for reelection, breaking a norm that has stood since 1900 with one exception, said Russell Wheeler, a visiting fellow at the Brookings Institution. Federal prosecutor Thomas Kirsch was confirmed as Barrett’s replacement on the federal appeals court based in Chicago on Dec. 15, on a mostly party-line vote.

The exception was the Senate’s bipartisan acceptance in 1980 of a former Senate staff member as a federal appeals court judge. That nominee was Stephen Breyer, now a Supreme Court justice.

Along with the question of legacy is whether Trump’s record on judges spurs major changes to the judiciary.

Wheeler, at Brookings, said one of the most striking features of the teamwork of Trump and McConnell is that they acted as though they had the support of most Americans. They did not, he said.

“My main beef with this current group is that there’s just no mandate to turn the judiciary so far to the right,” Wheeler said. “Trump lost the popular vote massively in 2016, but nevertheless has behaved as if he had a mandate to reshape the federal judiciary at the Supreme Court and Court of Appeals level and I think that’s just unfounded.”

Liberal groups already have been pushing for changes at the highest level, including expansion of the Supreme Court and term limits for justices. The political prospects for both ideas are uncertain, at best.

But there’s less doubt from any vantage point about what Trump has wrought.

The U.S. “will be living with the legacy of Donald Trump for decades to come as a result of his judicial appointments,” said Brian Fallon, executive director of Demand Justice, a liberal advocacy group. People who accepted judicial appointments from Trump will “wear the moniker of ‘Trump judge’ for the rest of their lives.”

Not so, in Conway’s view. “It will be one of the most lasting pieces of his legacy, distinguished and durable,” she said.