US election 2020: Trump is in the fight of his political life 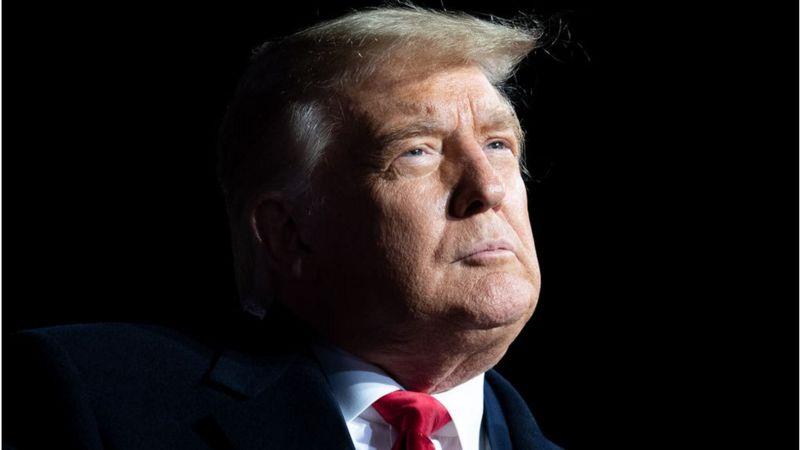 To think we began 2020 supposing the US presidential election would be the foremost news event of year: the story that would monopolise our journalistic attention; the travelling carnival that would see us clocking up tens of thousands of miles; the democratic spectacle that would distance us from our families.

As we entered election year, the main health story to intrude on the campaign was the cardiac condition of Bernie Sanders, the 78-year-old candidate who had suffered a heart attack while campaigning in Las Vegas. Then there was the question of whether Joe Biden had the stamina to cope with the relentless schedule of the round-the-clock campaign. In a field crowded with 70-something politicians, the mortality of the leading candidates became a legitimate subject for discussion.

Back then, though, we had no inkling of how the deaths of more than 225,000 Americans would overshadow everything.

All of us sensed we would be covering an epoch-defining election. Maybe the most important of the past 50 years. But few of us foresaw how the history would be so epic and so deadly.

Nostalgia has become a driver of modern-day global politics, but rarely have we witnessed such a yearning for the immediate past. The days only 10 months ago when few of us had heard of Wuhan; when the handshake was a gesture of amity rather than menace; when t-shirts, bumper stickers and yard signs were the most obvious markers of your politics rather than whether you wear a mask.

Four years ago, the political genius of Donald Trump's Make America Great Again slogan was that it became a sentimental catch-all. Rather than sketching out a timeline himself, he let voters decide for themselves when America had last been great. This gave his supporters the historic licence to conjure up kingdoms of the mind, places that sometimes existed only in the abstract.

For some, American greatness was found in the Reagan years of the 1980s, the era of resurgence after the long national nightmare of Vietnam, Watergate and the Iranian hostage crisis. For many it was the Fifties, before African-Americans had been granted a full menu of civil rights; before the women's liberation movement challenged what had always been a male-dominated society.

In the final weeks of this campaign, however, Donald Trump has been more specific. He has pin-pointed a date. He has told us where to travel back in time. America was great "before the plague", he keeps on telling his campaign rallies - when the United States had what he reckons was the strongest economy in the history of the world.

For a time his campaign toyed with the new slogan Make America Great Again Again. But it sounded more like a taunt - a reminder of the here and now, and how his mishandling of Covid-19 has come to imperil his presidency. 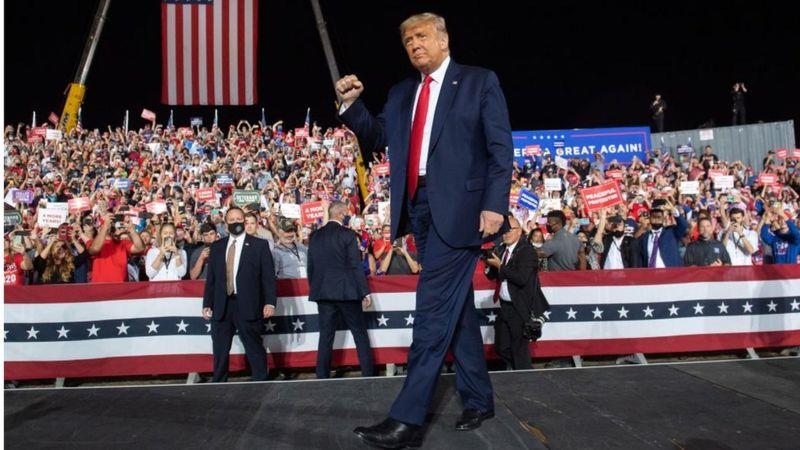 Before the coronavirus, the political vital signs for Donald Trump were strong. He had survived his impeachment trial. His presidential approval rating was the highest it had ever been. He could boast a strong economy and benefit from the advantages of incumbency, a combination that usually yields a first-term president four more years.

If in 2016 the coverage of the election had been based on the false predicate that a former reality TV star could never win the presidency, earlier this year the idea was starting to take hold that Donald Trump could not lose. In Iowa and New Hampshire, the more voters saw of his main rival Joe Biden, the more they noticed his weaknesses. And would America ever vote for the other main Democratic contender, Bernie Sanders, a former socialist? That arguably required a greater leap of imagination than the thought of a Trumpian second term.

Then, of course, everything changed. Covid granted Joe Biden a cloak of invisibility, a useful concealment for a candidate often so fumbling and frail. Donald Trump wrapped himself in the mantle of a wartime president, but in a battle that America quickly started to lose.

So 2020 has not been a re-run of the 2016 election, a banal observation that's worth restating nonetheless. 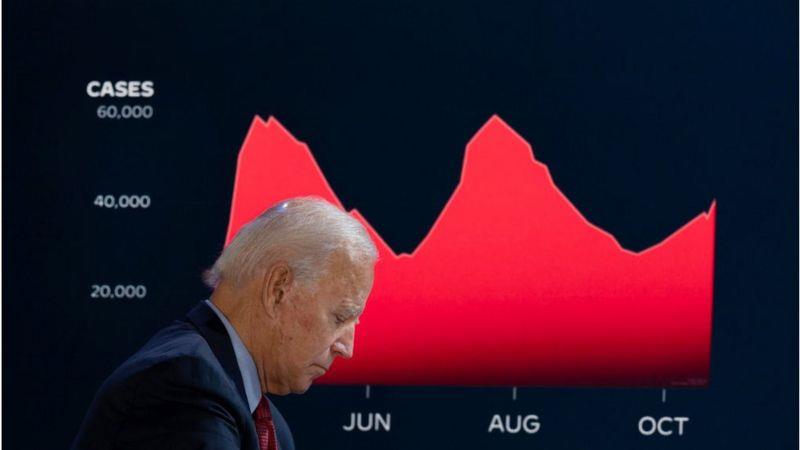 Trump is now the incumbent rather than the insurgent. He's got a record to defend. His opponent is not a hate figure like Hillary Clinton, but a genial grandfather, a likeable old man. Biden's radiant smile has become a valuable political weapon, so, too, his long personal experience of grief. It's partly why there seem to be fewer Trump Democrats around in 2020, and more Biden Republicans.

Four years ago there was an underlying brilliance in Donald Trump's ability to articulate the grievances of his supporters; to say things that were once considered unsayable. But what's been noticeable about this election is how he's given voice more to his own frustrations: venting, often in a self-pitying tone, about having to contend with "the China virus"; lashing out against public health officials, such as Dr Anthony Fauci; targeting Democratic governors whose state shutdowns have paralysed the Trump economy; complaining, as ever, about the press.

Trump succeeded in 2016 because he presented himself as an anti-Obama and an anti-Hillary. Part of the reason Joe Biden is leading in the polls is because he so easily fits the role of the anti-Trump.

Americans will continue the trend of living in like-minded communities, the red and the blue, and to segregate themselves politically both residentially and online. To many who feel like castaways in the post-industrial economy, the American Dream will continue to be a chimera. Then there is the enduring plague of racism, the scourge that for centuries has been upon us.

It's a constant reminder that division is endemic; that disunion is this country's long-haul condition.

On the eve of this election, we do not even know whether the president will accept the result, which many will interpret as another symptom of what they see as the creeping authoritarianism of the past four years, another septic sign of America's democratic decay.

Since his emergence onto the national scene forty years ago, Donald Trump has so often embodied the zeitgeist. He first caught our eye because he personified the 1980s. He was a creature of the tabloid excesses of the Nineties. He started this century as a star of a new form of entertainment, reality TV; and then made the leap into cyberspace as a viral sensation in our disruptive digital age. Now, though, he has an unwanted persona that speaks of this fatal moment: America's pandemic president is fighting for his political life.