What Trump could do after leaving the White House 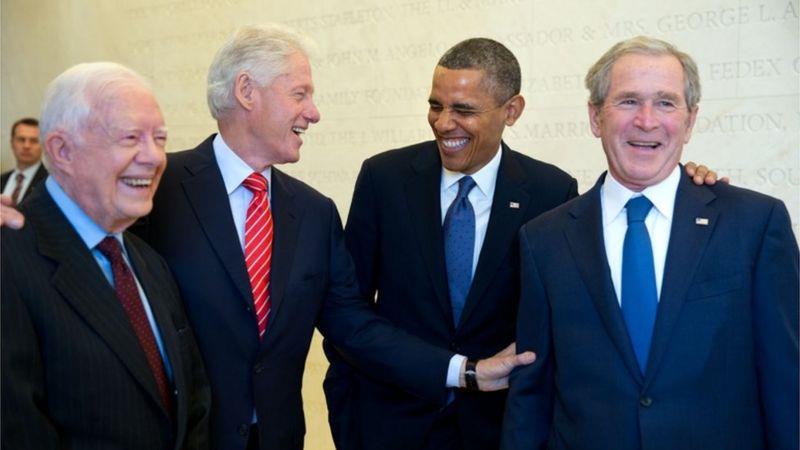 
Donald Trump will remain in office until 20 January, when he'll hand the job over to his successor and join the exclusive club of former US presidents. So what next for the politician and business mogul?

There's a lucrative speakers' circuit, the penning of a memoir, the planning of a presidential library.

Jimmy Carter took up humanitarian causes, and George W Bush a paintbrush. But Mr Trump has never been a traditional politician.

"There's no reason to think that Donald Trump will act like any former president that we've ever seen."

Here are some of the possibilities.

He could run again

It may not be the end of Mr Trump's political ambitions - he could always pull a Grover Cleveland and run for a second term.

Cleveland is the only president to leave the White House and return four years later, taking on the top job in 1885 and then again in 1893.

The US Constitution stipulates that "no person shall be elected to the office of the President more than twice", but there's nothing about terms needing to be consecutive.

And former aides have suggested Mr Trump may seek to do just that.

"I would absolutely put him on the shortlist of people who are likely to run in 2024," former chief of staff, Mick Mulvaney, recently said.

Mr Trump clearly loves campaign rallies and he received 71.5 million votes in the election - a record total for a losing candidate, and one that clearly demonstrates a significant base of support among the American public. 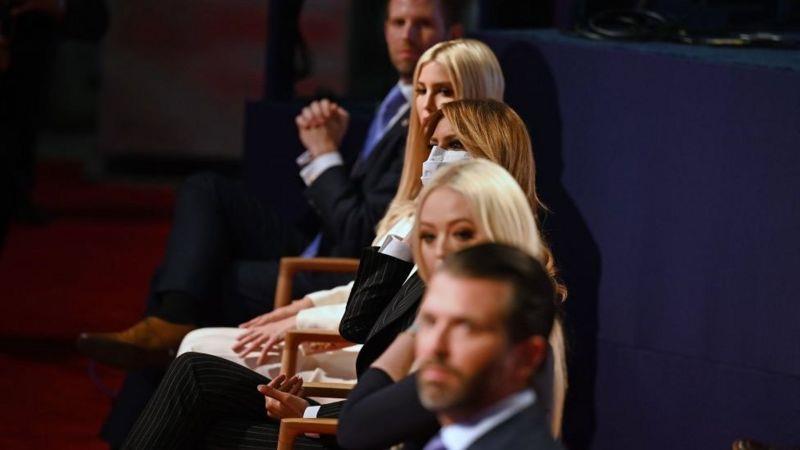 Trump's children may have their own political ambitions

"He will leave the presidency with a brand in some ways just as powerful as it was when he came into the presidency," says Prof Calkins.

There has also been speculation that the president's eldest son, Donald Trump Jr, is interested in running for the top job, conjecture he hasn't tried to tamp down.

Before he was a politician, Mr Trump was a real estate mogul, a reality television star and his own brand ambassador, using his name for lucrative licensing deals.

He may be keen to pick up where he left off four years ago and get back into the world of business.

The New York Times has reported that Mr Trump has over $400m (£300m) in loans coming due over the next few years - though he has said that represents "a tiny percentage" of his net worth.

The Trump Organization has numerous hotels and golf courses.

There are Trump-branded properties in Mumbai, Istanbul and the Philippines - and of course, Washington, DC - and golf courses in the US, the UK, Dubai and Indonesia.

But if that is the course the president chooses in January, he'll have plenty of work ahead of him.

Many of his business ventures are in the travel and leisure industry, which was badly affected by the coronavirus pandemic.

Forbes has reported his wealth could have taken as much as a $1bn hit due to Covid-19.

Based on two decades of tax papers seen by the New York Times, the newspaper also reported "chronic losses and years of tax avoidance", saying he paid no income taxes at all in 10 of the previous 15 years, "largely because he reported losing much more money than he made". 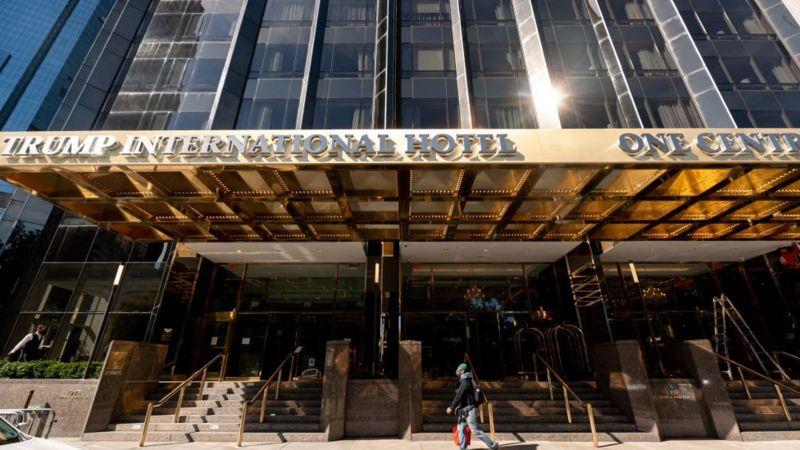 Both the Trump Organization and the president criticised the report as inaccurate.

Mr Calkins said the president has proven time and again he has an incredible ability to keep his brand "in the conversation" and it remains strong - but not unchanged - by the presidency.

"It's become far more polarising and far more distinctive, which in some ways makes it less appealing as a business brand," he says.

"Now if you're going to have a wedding at a Trump hotel, that is really making a statement, that was not the case prior to the presidency."

First daughter Ivanka Trump's now shuttered namesake brand faced boycotts and was dropped by some major retailers once she took on her senior advisor role at the White House.

His sons Eric and Donald Jr were overseeing the Trump Organization, the umbrella company for Mr Trump's hundreds of investments in real estate, brands and other businesses, during the presidency but are also deeply involved in their father's political career.

"One of the things they will all be thinking about is, 'What is the best road forward [for the family]?'" says Prof Calkins.

President Trump is no stranger to television, after a bankable stint on The Apprentice reality show.

So there's a lot of speculation that his ambition is to get involved in the news media, either by launching his own channel or collaborating with an established conservative network.

Mr Trump succeeded in building his brand as a "love-to-hate personality" like the Kardashians or Howard Stern, he says. 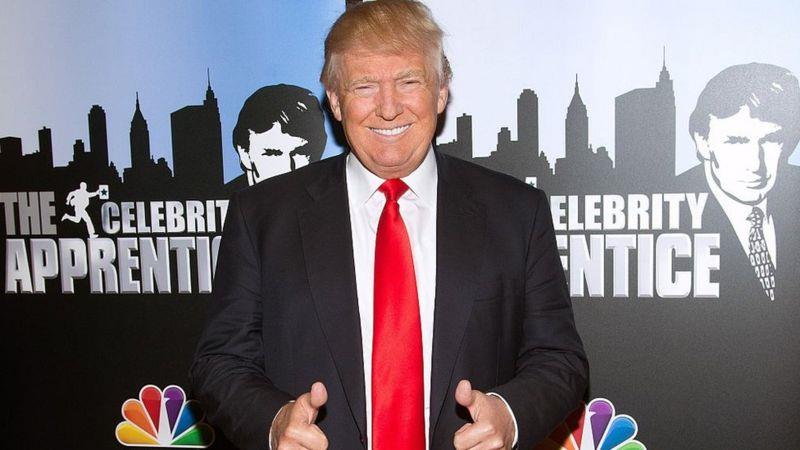 And Mr Schafer expects him to "fall back on what works best for him - that's controversy".

"He thrives on controversy, he spins controversy to his advantage, that's his 'MO' [modus operandi]."

OANN is a favourite of the president and vice-versa, and he has been described as "part ringleader, part muse" for the channel by the Atlantic magazine.

Christopher Ruddy, CEO of Newsmax, a conservative TV channel, was once dubbed a "Trump Whisperer" by the Washington Post.

There could be other media or entertainment ventures.

Presidents often sign book deals, with Barack and Michelle Obama netting a record-breaking joint deal reportedly worth $65m - though that amount is rare. George W Bush got a rumoured $10m advance for his memoir.

The Obamas also signed a multi-million dollar production deal with Netflix, and both the Clintons have podcast deals. 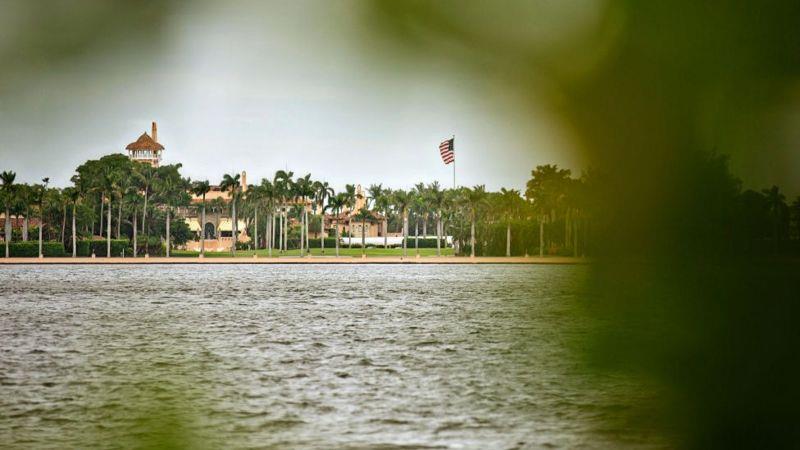 Mar-A-Lago, which the Trump team calls 'the winter White House'

Mr Trump will have a presidential pension - and plenty of other perks - when he leaves office.

So Mr Trump, now 74, could decide to quietly retire.

He could spend his days involved in philanthropic pursuits, boost his bank balance on the speakers' circuit and plan his presidential library - archives and museums of a president and his administration, usually in their home state.

And he could fill any spare time relaxing and playing golf in Florida at Mar-a-Lago, his Palm Beach retreat.

But Prof Calkins doesn't see the quiet life as a likely scenario for a man who spent so much of it in the limelight.

"Donald Trump as a personality is not likely to fade away and I think we're going to continue to see the Trump brand in the world," he says.

In October, Mr Trump even speculated that, if he lost the election he would feel so terrible that "maybe I'll have to leave the country, I don't know".