With constitutional questions murky, some churches continue to defy restrictions on gatherings As more states hunker down to combat the spread of novel coronavirus, some houses of worship around the country are still holding services -- either in direct defiance of executive orders, in areas where governors have carved out special religious exemptions, or in states that have yet to crack down on social gatherings.

At least 11 states are currently enforcing statewide stay-at-home orders or bans on mass gatherings with some version of a religious exemption. Six of those states are led by Democratic governors, five by Republicans – but the motivating principle behind the exemptions is largely the same.

Religious institutions are widely believed to be protected from such regulations by the concept of separation of church and state protected in the First Amendment. But whether that is actually the case is not clear.

"There’s not much precedent to go on here," said Josh Blackman, who teaches constitutional law at South Texas College of Law in Houston.

He believes the government is not obligated to exempt houses of worship, but states have the authority to do so if they chose. 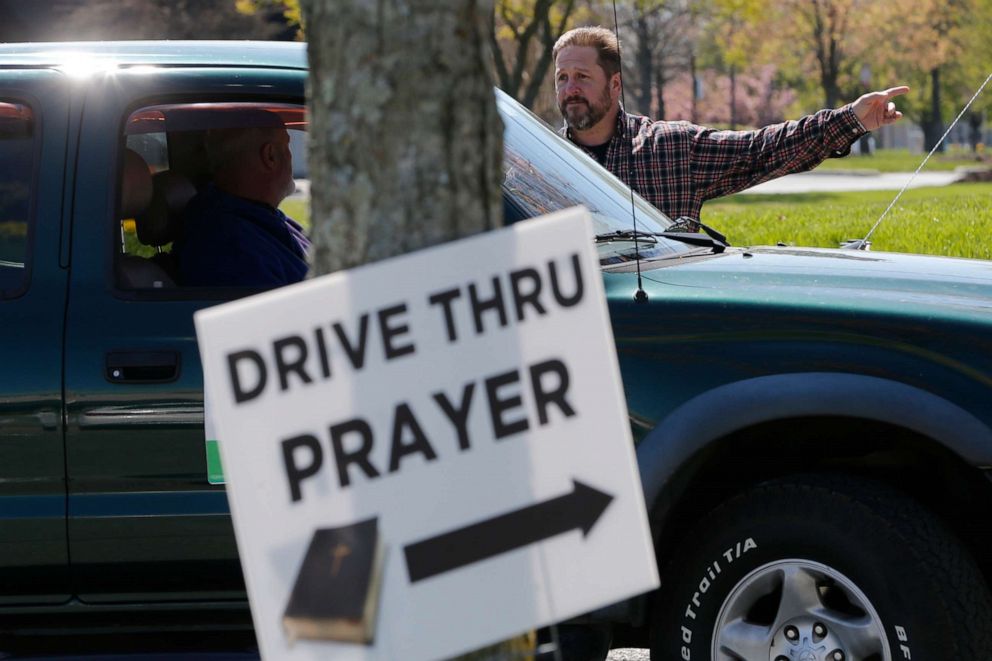 The Supreme Court has ruled that a law cannot "unduly burden" a specific religion unless there is a "compelling interest" in doing so, and that burden must be applied equally to secular institutions.

But Blackman notes that, for some religions, the burden of being barred from gathering in-person is greater than for others. Observant Jews and the Amish, for example, restrict the use of electricity, so streaming services online is not an option. There are also sects of Judaism that require a quorum of 10 -- a minyan -- to assemble in order to practice their religion.

"These edicts, without question, substantially burden religion. The only question is whether the government has a compelling enough interest to do it," said Blackman. "Or you might ask, is there any other way for the government to achieve its goals? And the answer is probably, no."

With no hard and fast legal standard, a tug-of-war is playing out between some state and local governments over whether religious gatherings should be allowed while the coronavirus outbreak rages on.

"There’s no reason why you can’t do a church service with people spread 10 feet apart, so we definitely ask them to abide by social distancing guidelines, but I think, in times like this, the service they are providing is very important for people," DeSantis said when pressed by reporters about why he is allowing worship services to continue.

The pastor who was charged, Dr. Rodney Howard-Browne, issued a lengthy statement Thursday explaining his decision defy the county order, which he decried as unconstitutional.

"The First Amendment provides express protections to houses of worship and assembly. There is no similar constitutional protection for commercial businesses; yet houses of worship and religious gatherings are signaled out for discrimination," he wrote, adding that extra precautions were taken to ensure the sanctuary was properly sanitized and the congregation adhered to social distancing guidelines.

Howard-Browne went on to announce that services this weekend are canceled -- not over concerns of spreading coronavirus, but due to death threats he’s received since his arrest became public.

A similar series of events played out in Texas this week, where three pastors joined a conservative activist in a lawsuit against Harris County after a local stay-at-home order barred in-person religious services from being held. Gov. Greg Abbott, also a Republican, signed a statewide shelter in place order Tuesday that carved out an exemption for houses of worship.

In both Florida and Texas, the governors’ actions essentially nullified the local orders barring religious gatherings.

The nonprofit advocacy group Americans United for the Separation of Church and State has been outspoken against such religious exemptions. In their view, the First Amendment actually requires religious organization to be held to the same standard as secular ones.

But even in states where religious gatherings are now prohibited, there are faith communities that continue hosting them.

Louisiana Gov. John Bel Edwards, a Democrat, included houses of worship in his stay-at-home mandate, but the Life Tabernacle Church is still holding services even after its pastor was cited for violating the state order.

A church in Sacramento is reportedly still hosting gatherings in congregants’ homes in defiance of a statewide ban on gatherings of more than 10, and despite the fact that 71 members of the congregation, including three pastors, have tested positive for the COVID-19.

The messaging from Washington about whether religious gatherings should continue in the midst of the coronavirus outbreak has been no less murky.

Tune into ABC at 1 p.m. ET and ABC News Live at 4 p.m. ET every weekday for special coverage of the novel coronavirus with the full ABC News team, including the latest news, context and analysis.

President Donald Trump abandoned what he now says was an "aspirational" target of seeing churches packed by Easter, and he said Wednesday that his "biggest disappointment is that churches can’t meet in a time of need."

The administration since extended its social distancing guidelines through April, but has stopped short of calling on all houses of worship to suspend services.

"This is really a great time for churches to be together," the president added. "Yet if you do that, if you do it close you are really giving this invisible enemy a very big advantage. It's the single biggest disappointment."