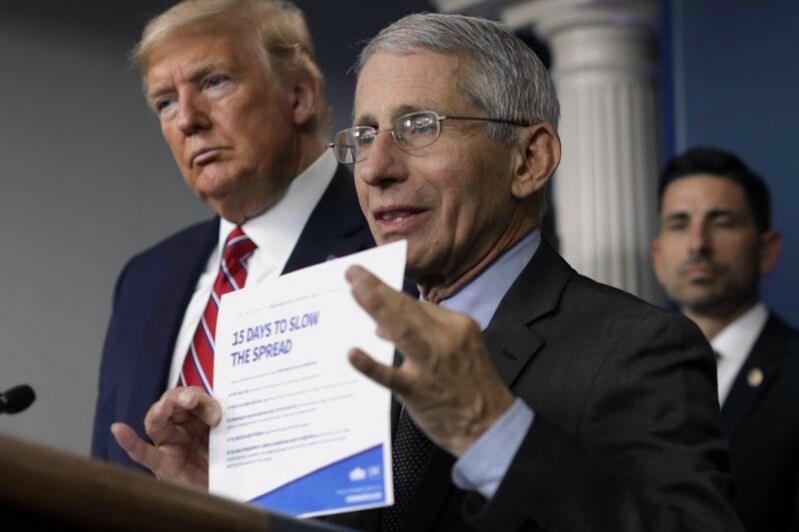 Enlarge / WASHINGTON, DC - MARCH 20, 2020: Director of the National Institute of Allergy and Infectious Diseases Dr. Anthony Fauci holds up the "15 Days to Slow the Spread" instruction as US President Donald Trump looks on during a news briefing on the coronavirus outbreak.

Dr. Anthony Fauci has one of the toughest and most important jobs in government as director of the National Institute of Allergy and Infectious Diseases. The nation's top infectious disease expert, Fauci plays a major role in the coronavirus-pandemic response and is regularly seen at press conferences alongside President Donald Trump—who doesn't share Fauci's inclination and ability to give Americans the most accurate information in a time of crisis.

Fauci addressed his interesting relationship with Trump in a Science Magazine interview published yesterday. "I can't jump in front of the microphone and push him down," Fauci said when asked about moments when Trump makes factual mistakes at press conferences.

Here's the full version of that exchange between Science Magazine reporter Jon Cohen and Fauci:

Q: What about the travel restrictions? Trump keeps saying that the travel ban for China, which began February 2, had a big impact [on slowing the spread of the virus to the United States] and that he wishes China would have told us 3 to 4 months earlier and that they were "very secretive." [China did not immediately reveal the discovery of a new coronavirus in late December 2019, but by January 10, Chinese researchers made the sequence of the virus public.] It just doesn't comport with facts.

Q: Most everyone thinks that you're doing a remarkable job, but you're standing there as the representative of truth and facts, but things are being said that aren't true and aren't factual.

A: The way it happened is that after he made that statement [suggesting China could have revealed the discovery of a new coronavirus three to four months earlier], I told the appropriate people, it doesn't comport, because two or three months earlier would have been September. The next time they sit down with him and talk about what he's going to say, they will say, "By the way, Mr. President, be careful about this and don't say that." But I can't jump in front of the microphone and push him down. OK, he said it. Let's try and get it corrected for the next time.

Cohen also asked Fauci how he has avoided getting fired by Trump. "Well, that's pretty interesting because to his [Trump's] credit, even though we disagree on some things, he listens," Fauci said. "He goes his own way. He has his own style. But on substantive issues, he does listen to what I say."

Fauci acknowledged that Trump's press conferences can give the American public "some misunderstanding" about the pandemic:

Q: You've been in press conferences where things are happening that you disagree with, is that fair to say?

A: Well, I don't disagree in the substance. It is expressed in a way that I would not express it, because it could lead to some misunderstanding about what the facts are about a given subject.

Fauci said that Trump "ad libs" despite the preparation Fauci and others do before each press conference.

"We're in the task force [before each press conference]. We sit down for an hour and a half, go over all the issues on the agenda," Fauci explained. "And then we proceed from there to an anteroom right in front of the Oval Office to talk about what are going to be the messages, what are the kind of things we're going to want to emphasize? Then we go in to see the president, we present [our consensus] to him, and somebody writes a speech. Then he gets up and ad libs on his speech. And then we're up there to try and answer questions."

Trump's tendencies have been on display in public discussions over the possibility of using malaria drugs to treat COVID-19, leading to an Associated Press story titled, "Trump vs Fauci: President's gut sense collides with science." While Trump touted the drugs as "hav[ing] a real chance to be one of the biggest game changers in the history of medicine," Fauci explained that the evidence so far is purely "anecdotal."

In an interview with New York Times columnist Maureen Dowd, Fauci said he doesn't want to embarrass Trump but that he must get accurate information to the public.

Instead of telling Trump directly that "you're wrong," Fauci said his approach is to "continually talk about what the data are and what the evidence is." Trump, Fauci continued, "doesn't take it in a way that I'm confronting him in any way. He takes it in a good way."

“I cannot do the impossible”

In the Science Magazine interview, Dr. Fauci was asked about Trump press conferences having many more than 10 people in the room despite the government recommending that gatherings contain no more than ten people. "I know that. I'm trying my best. I cannot do the impossible," Fauci said.

Fauci said he has repeatedly asked if they can do virtual press conferences instead of ones that are in person. "But when you're dealing with the White House, sometimes you have to say things one, two, three, four times, and then it happens. So I'm going to keep pushing," he said.

Fauci was also asked whether it's a mistake for shelter-in-place orders to happen state-by-state rather than on a national basis. He said there's no easy answer. "No, I don't think we could say it's a mistake or not a mistake," he said. "There is a discussion and a delicate balance about what's the overall impact of shutting everything down completely for an indefinite period of time."

People in general should "do as much physical separation as [they] can," and separation measures must be ratcheted up in the highest-risk areas such as New York, California, and Washington state, he said. "If you lock down everything now, you're going to crash the whole society. So you do what you can do, as best as you can," he said.